Through a bright hallway, full of plants and small pieces of pottery and palm, a tide of coloured paper is stirring in the wind. With the intense sunlight, the vines that trail down from the ceiling trace engravings on the white walls like a theatre of shadows. At the end of that tunnel, almost in the dining space, a reed frame simulates the cosmos. From there hang red, yellow, blue-black corn cobs, with their dried leaves like petals. A kind of reproduction of the universe where the stars are corn. It takes me several minutes to recognise that it is the restaurant Teocintle because it looks like any cosy house in downtown Oaxaca.

Toño García, a 26-year-old chef from Tlaxiaco, suddenly appears among the tables set with clay crockery and decorated with mostly natural elements. He and his friend Azael Jiménez, a 24-year-old chef from Yanhuitlán, founded this space in January 2019 with the idea of ​​using the ancestral techniques of the cuisine of the Mixteca region of Oaxaca to which both belong. In those places, people raise animals that feed on corn that is not fit for human use, they take advantage of each grain in that cycle. “In the Mixtec kitchen nothing is wasted, all ingredients are respected and used until the last pinch,” says Toño. 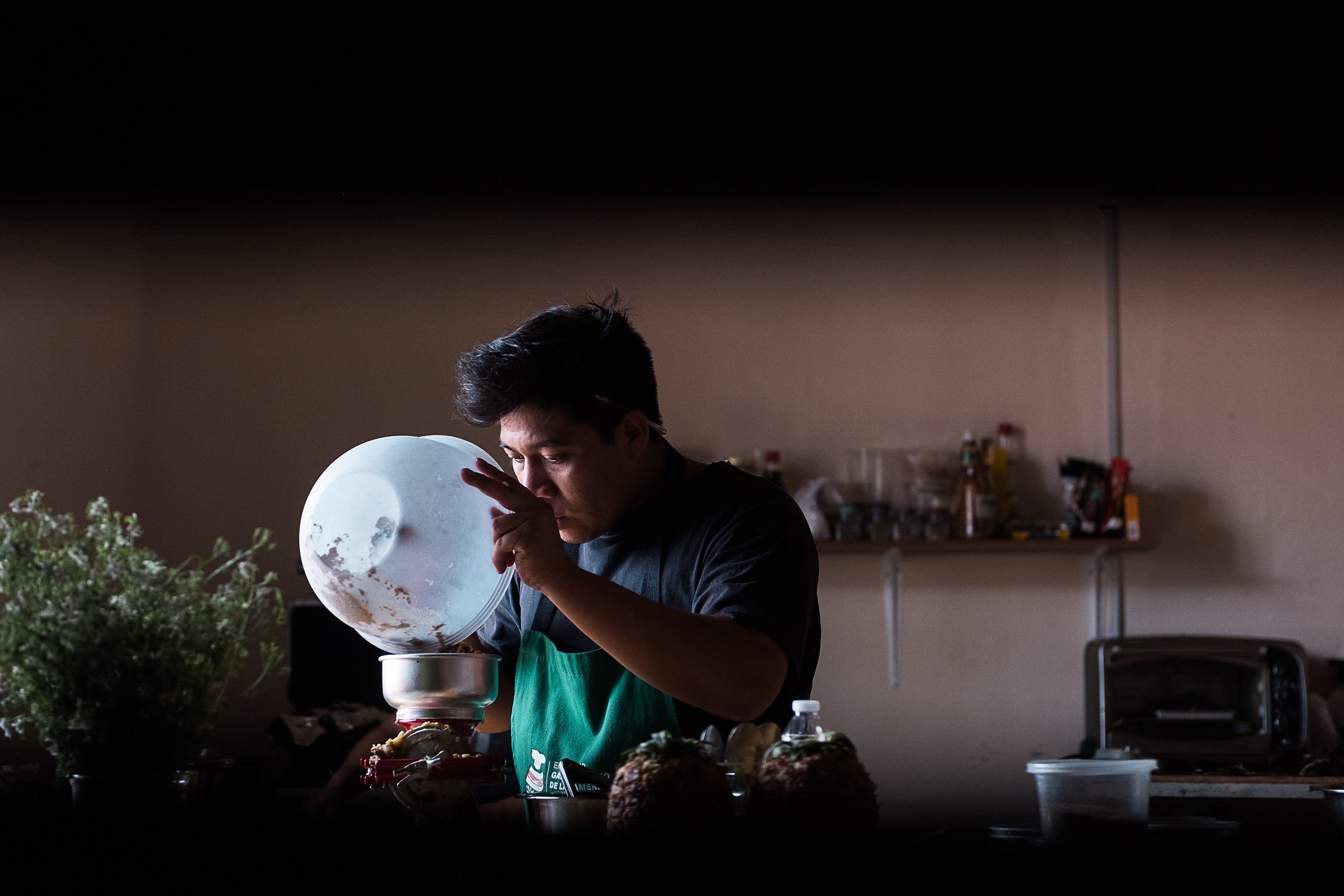 Teocintle is the ancestor of the corn later modified by humans, the mother of that corn with which this chef has been intimately related since childhood. Although in fact, he tells me that they chose the name by chance. Similarly, Teocintle the restaurant arose spontaneously when Toño quit his job in the kitchen of a restaurant and met Azael. Together they initiated the fonda-style project with dishes in special arrangements that drew the attention of the guests. Today it is a slow food space that opens its doors in Oaxaca’s historical centre from 2-10pm and you can only go by reservation.

Behind Teocintle there is dedication in the preparation of the food and the knowledge of Mixtec cuisine, but there are also harmonious ways of coexistence: “Work, jokes, joy, because there is time for everything, they treat you well, you enjoy working,” smiles Toño, reflecting on the thinking of the Mixtec people. The concept of his kitchen is far from the stressful systems commonly practised in restaurants and is closer to the loving and patient ways in which they cook in the Mixteca. Through a memory of his childhood, we are at the woodstove where “a lady is making her mole and has been sitting in her kitchen all day, preparing it”. I see the smoke coming out of the brazier, I hear the noise of the metate as she grinds the seeds, the chillies thunder in the heat of the comal, the ochre and orange colours are mixed in the large clay pot. Toño, then, assures me, “The luxury in us is the food, we dedicate a lot of time to it.” 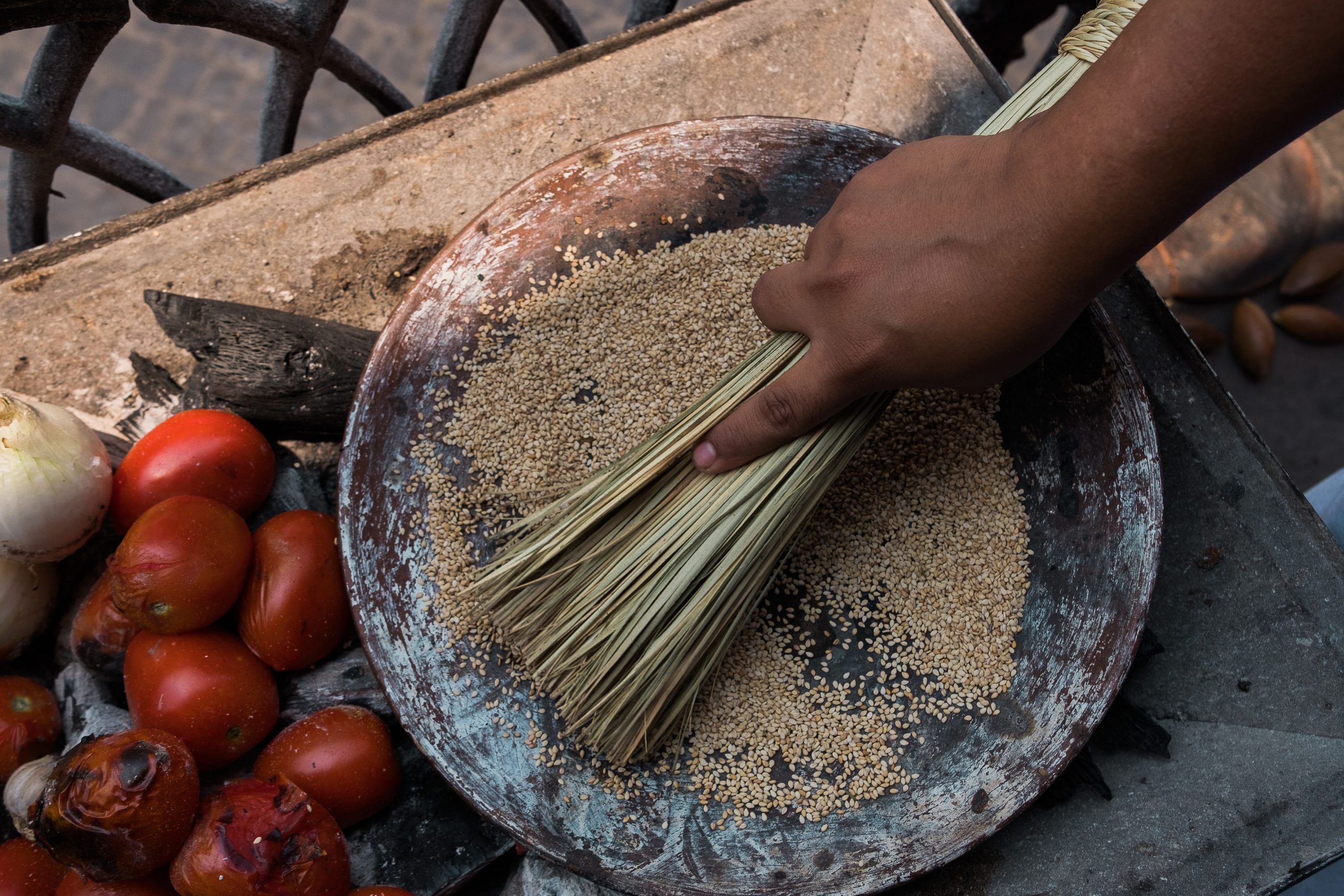 Native food reconnects you with your ancestors

Toño’s relationship with the kitchen dates back to when his aunt took him as a child to sow seeds with the plough. You had to pixcar (harvest), cut hay, peas. In those years, he learned the entire process of harvesting and how to pronounce in his Mixtec language ko´o: plate; xtaa: tortilla; ita: flower; and to greet in the language of his ancestors tanini: good morning; tanikua: good afternoon.

Much of his knowledge about gastronomy can be attributed to his mother and his intuition: that natural and sensitive ability that allows him to create diverse combinations of fresh aguas inspired only by the memories of the native ingredients his mother used to use at home: ruda, hierba maestra, marrubio, pericón, árnica. Ingredients that combine to create agua with cacao and toasted corn, combined with a touch of clove and pepper or passionfruit water with fresh coriander. “The idea is to drink natural water with aroma or flavoured with herbs. Offering agua to welcome you to a home is part of the Mixtec tradition”, and then he offers me a jícara full of laurel tea with apple for us to continue talking. 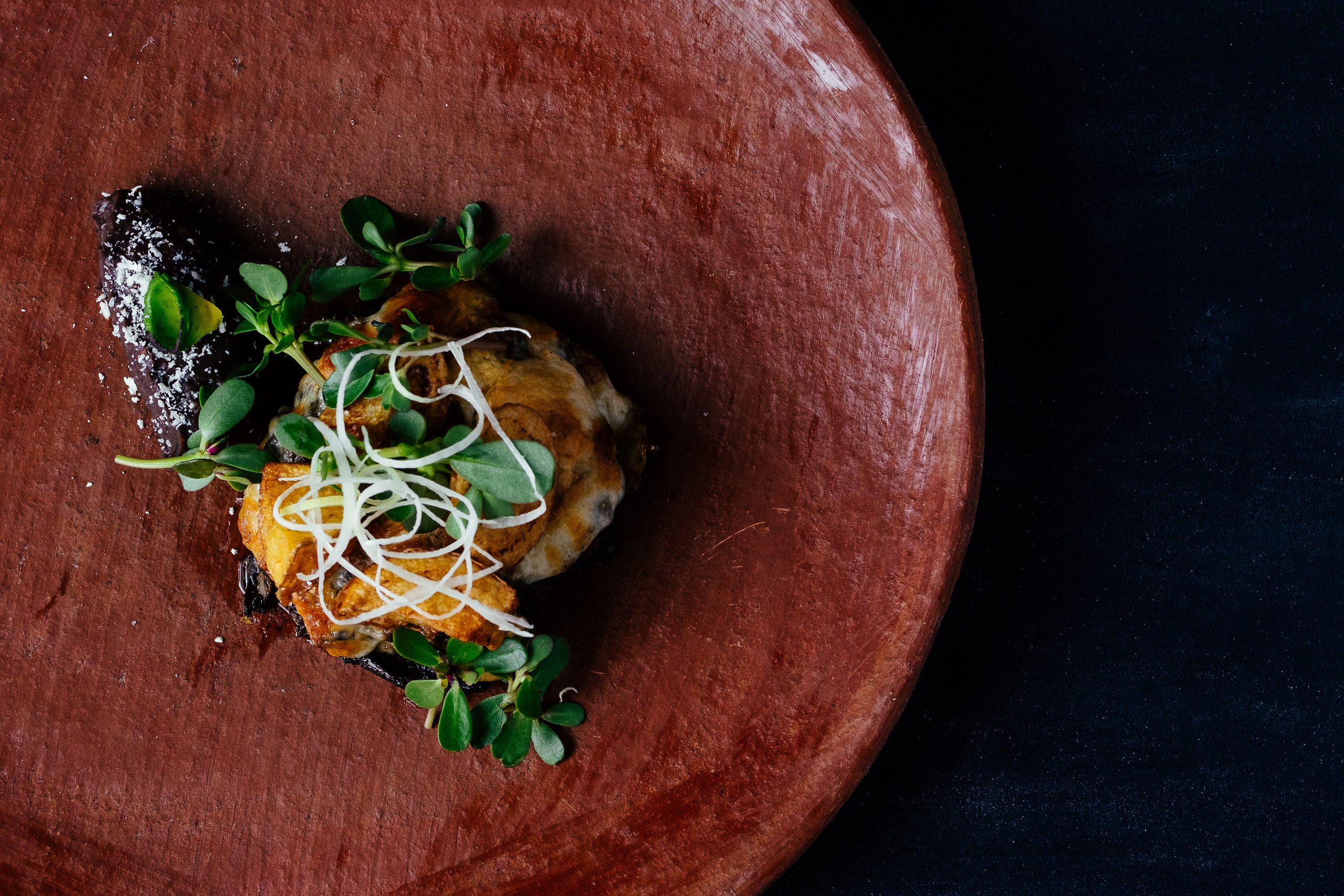 From this strong intuition to combine herbs and food grown in Yanhuitlán – chepito, heirloom coriander, pennyroyal, beans, zucchini, spiny chayote – a creative and eclectic menu emerges that nourishes the heart and satisfies hunger. While in the beginning, Teocintle had only seasonal cooking, Chef Toño began to investigate and conceive the combinations of Mixtec style chileajos to create a 5-course menu, each one with a different garnish; dishes that play primarily with the principles of fine Mixtec cuisine and western ingredients. There is the tutu ñuú, a corn tortilla ball fresh from the comal, with salt, hoja santa and dried chilli. “In the Mixteca, the tortilla gets covered with this mixture, it is made into a small ball, and they give it to you to eat.” Tutu ñuú means fresh, aromatic, and strong flavour.

Sometimes at breakfast, you can find traditional red chilaquiles made with sun-drenched tortillas bathed in a sauce of chile costeño, guajillo and puya, in addition to condiments. Or egg in hoja santa with cheese from Chiapas, or a wheat tortilla pocket filled with beetroot in soy sauce, toasted sesame seeds, and chintextle mayonnaise, a combination from the Mixteca and Sierra Mixe regions.

Sprouts are also part of this culinary repertoire: watercress, creole coriander tips, parsley tips, and the combinations of marinated octopus or chintextle with a touch of smoky aromatic oil; and the variety of bean soups with pitiona herb, made according to the Mixteca recipe. 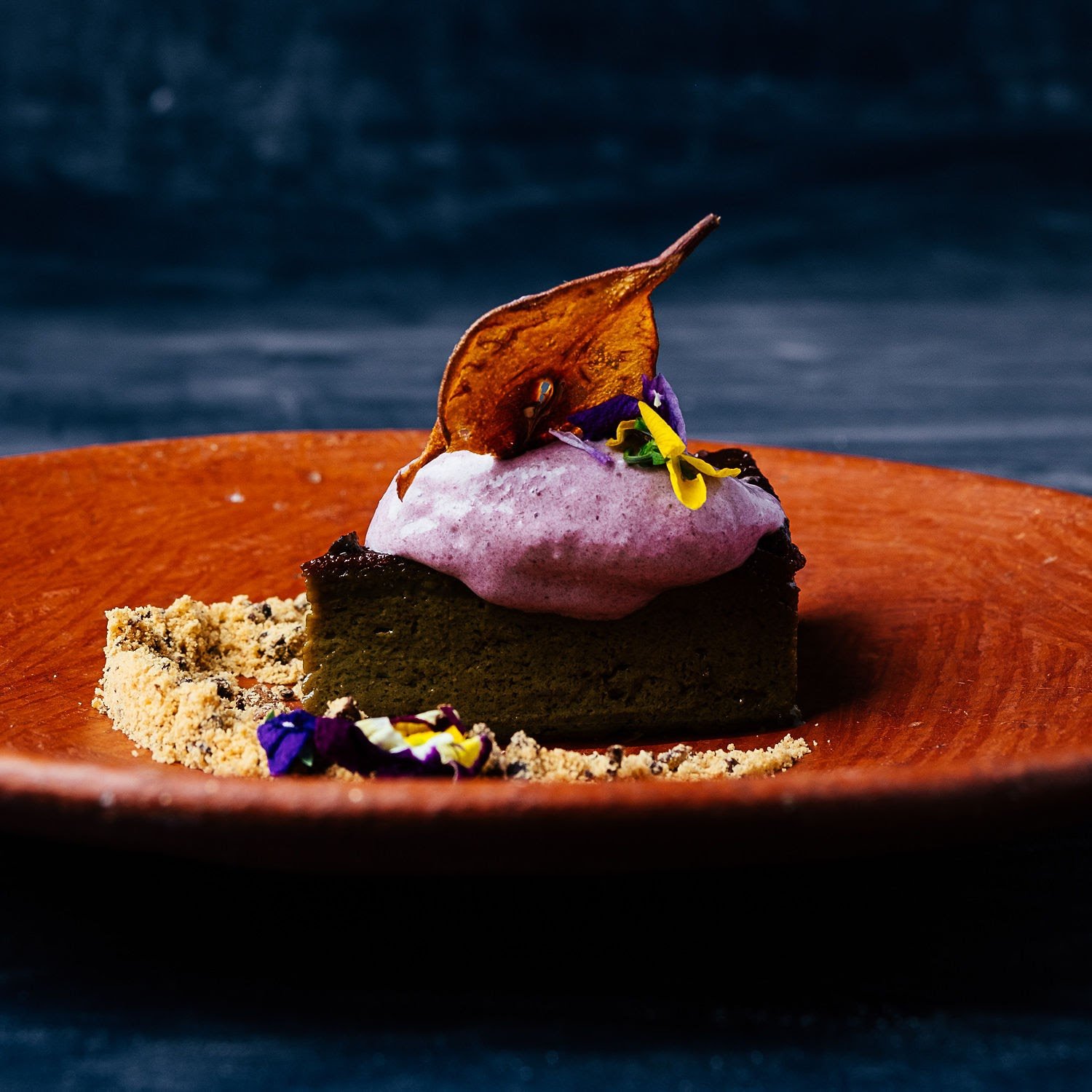 And although the concept of dessert is non-existent in indigenous gastronomy, Teocintle incorporates regional sweets such as ice cream cake, custard empanadas, and torrejas with cane sugar, in addition to fruits that are first nixtamalised according to the thousand-year-old technique used for corn, and then crystalised, as in the case of very ripe papaya, which is placed in lime and cooked in brown sugar, cinnamon, and pepper. Or the special creation of this restaurant: traditional bizcocho made from toasted bean flour, an ingredient that comes from Mixtec cuisine where legume powders such as chickpea, fava and black beans abound.

We walk through the kitchen where there are jugs, burning comals, dried red chillis with their seeds exposed in a tray, pyramids of metates, antique coffee grinders, jars of spices, dried herbs arranged in a clay dish as if it were an art installation. So I observe that Teocintle does not have the pressure of a fancy restaurant, except in the standards of Mixtec haute cuisine where refrigerated food has no place.

Native food makes you strong and is a resistance

Cooking for me is a landscape, says Toño, like being in my mother’s town when we sowed corn. It is to sit outside and enjoy the food on the hill, to put the stones on the ground, light the fire, prepare the anafre, heat the mole de espinazo there in the clay pots, to drink pulque and tepache in the breaks that we allowed ourselves when we were planting. All those foods that women carried in tenates, while men carried their picks and shovels. For Toño, to cook is to take you to a midday of any season of the year from the Teocintle restaurant to the mountains of the Mixteca region where the wind, the smell, and the taste of the herbal mixtures heighten your emotions. You drink an agua of pineapple pulp with pea and lemon peel in a jícara or an agua of macerated medicinal herbs, and awake under the shadow of the mythical Apoala tree, where the Mixtec people were born, or perhaps in a cosmos that shines with corn stars. 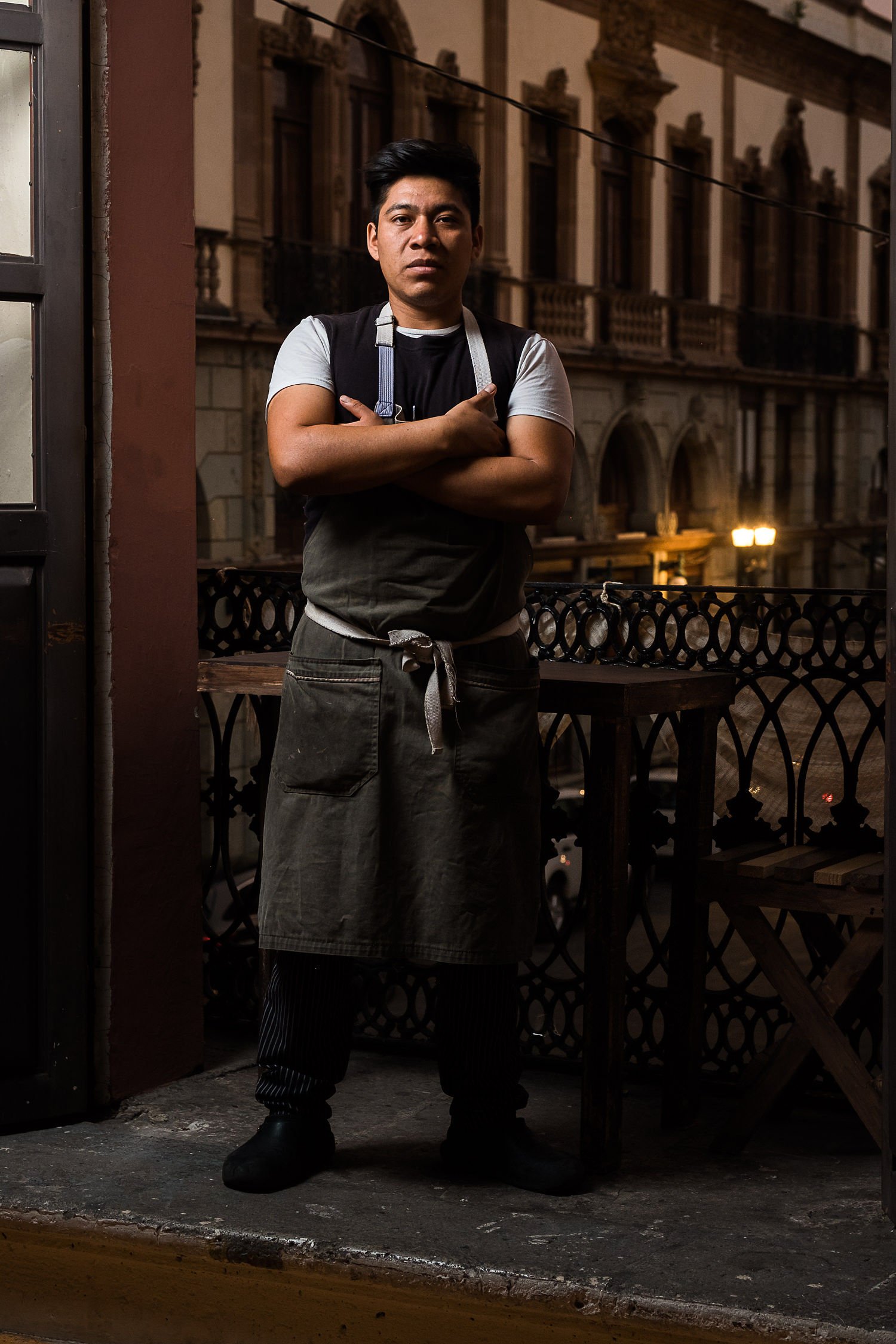 This article was originally published in issue 8 of our print magazine in April 2020.