It would be more natural for Tabasco or Chiapas to be the cradle of Mexican chocolate because that’s where it grows so easily, so organically. But those places just don’t have the complicated history that Oaxaca has. It’s that history that makes our chocolate so unique, so Oaxacan.”

I was drinking chocolate de agua on a bustling Friday morning at El Rito Chocolatería in Oaxaca Centro with Flor Heras. She’s a third-generation chocolatier and she co-owns this stall-style café in front of Sánchez Pascuas market with her sister. “But I don’t make my grandmother’s recipe and I don’t make my father’s. We all make it in our own style, but we drink all of it, everyone’s, and we love all of it.”

Flor is serious about chocolate. She teaches workshops to children, adolescents, and adults about the importance of cacao in Oaxacan history. She offers tastings using the same meticulous procedures as a wine or coffee tasting. She has a cacao plant tattoo. She even sent me home with a stack of books because “if you really want to know, to love what you are drinking, you’ll need to know the history.” 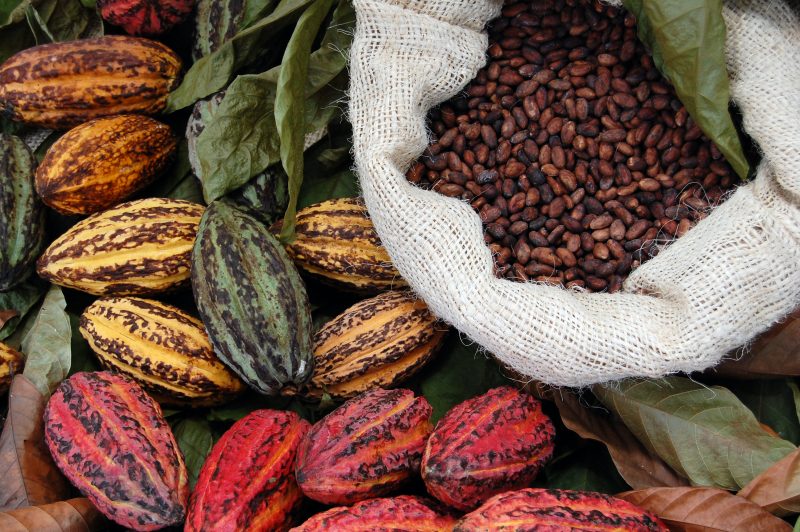 The history of Oaxacan chocolate begins with a convergence of indigenous people, each bringing ceremony and technique. Dated traces of cacao inside ceramic pots tell us that the Olmecs were probably the first to extract the seeds, ferment them, and roast them before grinding them to form a paste. This paste was used to make the porridge-like beverage of atole. Mayans embraced cacao so completely that they were the ones who named it KaKaWa, “the food of the gods”. As Mexico’s first peoples moved, interacted, warred, and negotiated, cacao was introduced to the Mixtec and Zapotec people of the Oaxaca valley. It was highly prized and consequently, reserved for royalty and ceremonial feasts. Its use in the 11th-century wedding ceremony at Monte Albán of Mixteca ruler Iya Nacuaa Teyusi Ñaña (commonly referred to by historians as “8 Deer”) was recorded in the pre-Columbian ancestral document, ‘Codex Nuttal’.

Even in its earliest forms, cacao was mixed with herbs, chili, vanilla, and nuts. Ground together with these different ingredients after roasting, the bitterness of the cacao would mellow and create a broad richness that would rival the fine French wines or expert coffee roasts today.

But the story of cacao in Oaxaca isn’t that straightforward. The distinct flavor of Oaxacan chocolate also requires Spanish conquest and colonialism. “The Spanish gave us pain, oppression, and cinnamon. Oaxacan chocolate must have cinnamon. So, we have to thank the Spaniards for that.” She tells me how both the conquistadors and the Catholic missions influenced chocolate by adding sweeteners because “their palates couldn’t handle the bitterness and strength of Mexico or her chocolate.” (Flor is serious about cacao but she also has a great sense of humor about it.) It was the clergymen who first brought chocolate back to Europe, and with it, a lot of controversy as the Church debated if this caffeinated bitter drink was medicinal, a sinful aphrodisiac, or harmful stimulant. 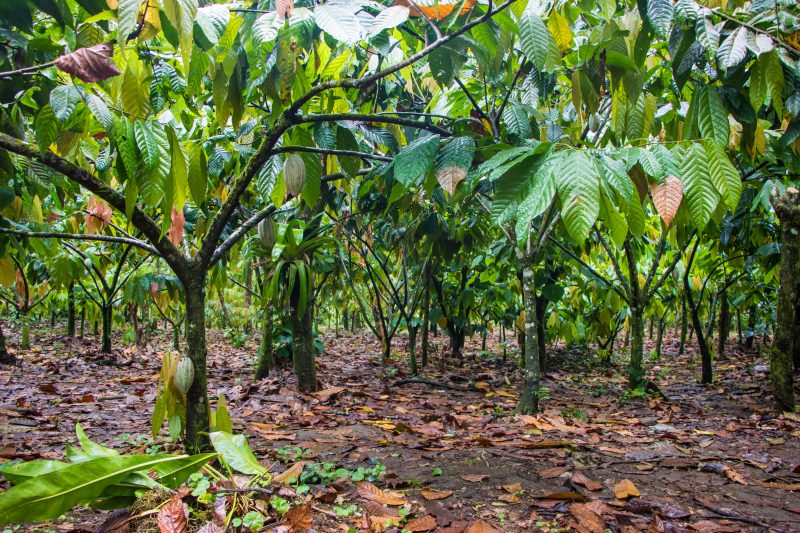 I want to talk more about colonialism but Flor turns to fetch us more cacao nibs. These roughly chopped dried and fermented cacao beans are my current chocolate obsession. I use them to top my fruit every morning and to perk up when an afternoon slump hits. While I snack, Flor casually comments, “We have had interlopers and influencers of all kinds. For example, the Hollander contrabandistas in the late 18th and early 19th century moved goods, moved spices, moved secrets. They are part of our story of learning about new ingredients and the story of sharing chocolate with the world.” I learn more about this piece of the chocolate-puzzle when I get home with Flor’s books. Mexico does indeed have an interesting history with Hollanders, both smugglers and Mennonites seeking religious freedoms. As traders, some legal and some not-so-legal, brought goods back to Europe, experimentation led to new forms of chocolate including Dutch cocoa, invented in 1828 by a chemist in the Netherlands. This led, in turn, to the creation of the solid chocolate bar. But Oaxacans stick to drinking chocolate.

There are so many trade lines, myths, and empires wrapped up in the history of cacao that books could be written about it — and of course, they have. But today, I want to know more about why cacao is still so important to modern Oaxacans. Flor tells me that Oaxacans hold onto the traditions of drinking chocolate because “we love stories, we love our culture, we love the ceremony of making it.” But, she also reminds me, “It’s so delicious! How would you improve it?”

I wince because I have just asked her to make me another chocolate de agua — this time served over ice which definitely isn’t ‘the traditional’ way of making it! She laughs at my contrition. “Of course, we can try new ways.” She reaches across the bar and grabs a box of chocolate from the display. It’s from her new brand, separate from the family’s “El Rito” label. I ask why she is doing something new when she is obviously so happy to promote and eat El Rito. “Because we always think we can do better, don’t we? Or at least do something different and exciting. […] ‘Reina Negra’ is my something different. I use a different machine that enhances the fat of the cacao. It makes it a little bit smoother. And, I use a different ratio of almonds and cinnamon than my father does.” 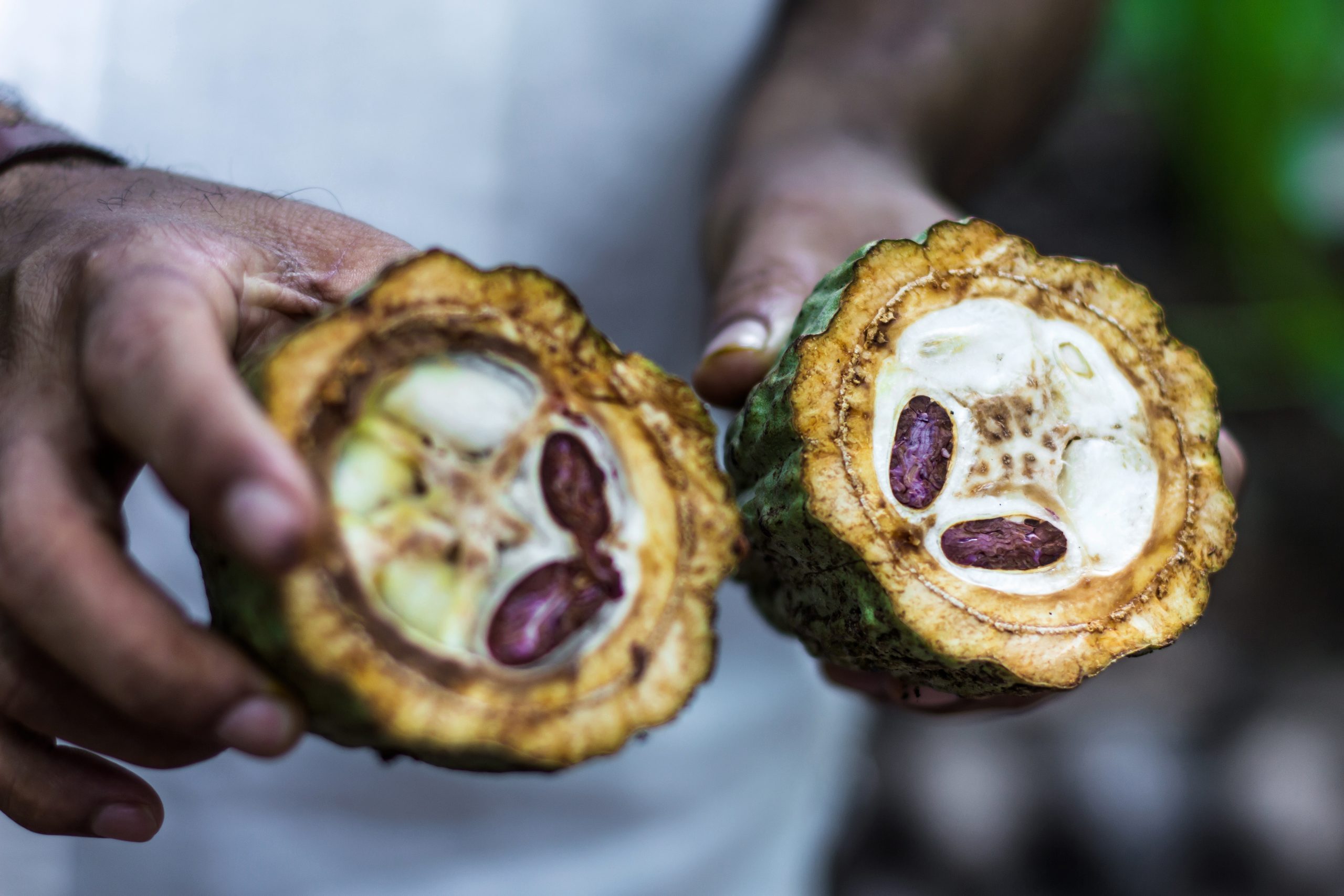 I wonder aloud about this ironic juxtaposition. Oaxacan chocolate is so sacred and beloved but everyone has their own recipe. How can Oaxaca be ‘the standard’ if there is no standard? Flor explains this contradiction by talking about fat. It’s the fat in the cacao bean — “the good fat!” — that turns a dry bitter bean into a smooth decadent paste. It’s the fat that we crave. “Some people keep adding more and more sugar, trying to improve it. It never works; use the fat.”

While there are many places to drink chocolate de agua in Oaxaca, Flor recommends making it yourself at least once. “You roast the beans. This is so much like coffee; one minute too long and just toss them because they are ruined.” After roasting, create your own blend using “maybe some sea salt, almonds, chile, herbs. We already talked about the cinnamon. It’s important.” There are old-school and modern ways to grind your cacao mixture at home, but most people go to their local molino (grinder) to use machines for a more consistent grind.

The classic drinking chocolate ratio is 30 grams of chocolate in 180 ml of boiling water. (You can also use milk, a deviation that has become commonly accepted in Oaxaca.) Using a molinillo wooden beater, or whisk dissolve, mix, and froth by rotating it as fast as possible between your palms. Taste it, adjust the flavours, taste it again.

“In Oaxaca, we love fiesta. We love to have calendas, to drink mezcal, to wear our traditional clothing and tell our traditional stories. But we also love to fight, to be conflicted. We, of course, have had to fight. We fought the Spanish, we fight the corruption, we fight with our protests and bloqueos for better schools, unions, etcetera. We don’t always agree – just like we don’t agree on the recipes. But we fight with a common good, and good flavour, in mind. That is also part of our story.”

Making your own Oaxacan drinking chocolate is both experiment and ritual, tradition and creation. It’s a way to add some of yourself to the flavour of Oaxaca and to her story.

I leave Flor’s cafe, satisfied on stories and bitter cacao, with her new Reina Negra chocolate, a bag of cacao nibs, and a box of El Rito chocolate discs. Inspired, I decide to roast my own cacao over the weekend, but I’ll need to stop at the mercado for a few more ingredients. I can’t decide whether to try adding rosemary or stick with my favourite: sea salt. Of course, I won’t forget the cinnamon.