Thursday, March 4
You are at:Home»Interviews»Marco Buonamico in Conversation

Marco Buonamico repeatedly uses the word “equilibrium”, and it makes a lot of sense. Those who have seen his namesake The Buonamico’s Band before will know they are a group that incorporate many different styles at the same time, without ever being chaotic. They take their myriad influences and create their own original, controlled sound that certainly gets loose, is always outrageously fun, but never goes off the rails. Equilibrium.

It was a long road to get to this point. Marco moved to Oaxaca from Barcelona eight years ago with the clear intention of starting his own musical project.  He found himself distracted in the best way possible by quickly joining La China Sonidera, one of Oaxaca’s biggest bands, who are also in the business of fusing influences, injecting Oaxacan cumbia with fresh sounds. While travelling the country – and sometimes out of the country – with that group, he never let go of his lifelong dream to lead his own band, and four years ago he started The Buonamico’s Band.

Several lineup changes, countless live shows and one studio album later, Marco says he finally feels content with where the band is at now. He is no longer a member of La China, allowing him to pour all of his musical energy into the feel-good, dub-tinged, horns-heavy sounds of The Buonamico’s Band. He’s worked hard to achieve the harmonious, open and relaxed relationship that the current 7-piece lineup have as a songwriting unit, and as an exceptionally confident live band.

All of the songs from the group’s album, La Dolce Vita, have that rare and special quality of being instantly recognisable. Watch them live, even just twice, and you’ll find yourself humming along to the tunes. This knack for a classically written tune could be traced back to Marco’s childhood in his hometown of Bari, Italy, listening to Bob Dylan and other folk and country classics that his father loved. Later came the love of groove, blues, funk, and the influence of African djembe musicians that he become close with in Barcelona.

And, clearly, moving to Mexico was a huge influence on his musical make-up, too.

“I always had this idea of getting to know Latin America. To mix the music, the Latin-America style – or way of playing more than anything – with my music. I found that a European who, for example plays the drums, can be good but they will never have the flavour… well not to say it’s better, but Latinos have a different style of playing that I am fascinated by.” 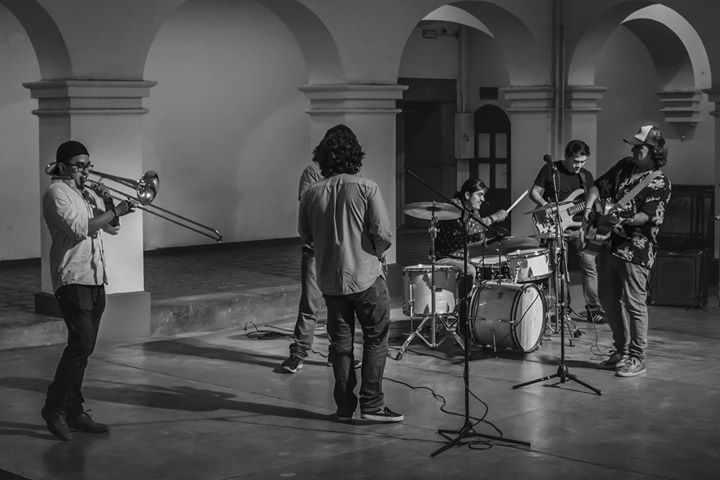 Being an ‘originals’  band in Oaxaca is no easy feat. In a city that is relatively conservative in its musical tastes, space to play can be limited.

“Now it’s starting to improve, but it has been very difficult to advance your own music in a context as small as Oaxaca. Oaxaca is a city where art and culture is very visible, on top of everything. And music, yes… but one type of music. There is a lack of openness to original music, to the proposals of the kids who are making music here. Of organisation, of festivals, of a musical movement. But it’s getting better, and you have to look at things in a positive light.”

With The Buonamico’s Band, Marco believes that, free of the confines of a single genre, they have potential to be received all over the world. One of his goals is for the band to perform in other states, and in festivals overseas, and says that Oaxaca can serve as an excellent “trampoline” for bands that would want to follow suit.  He says. “I’ve always thought if you work hard in the place where you are, if you create a movement, or at least make music that people love, it’s a good first step for moving outwards.”

If you go to see the band live, it’s abundantly clear that the people love them. The wide appeal of the band is an interesting contrast to Marco’s other, less public, creative output as a visual artist, something that he has done parallel to music since he was 16 years old. When talking about his work as a lyricist he says, “I always try to write things that people can reflect on, simple things that happen in life and that someone can hear and say ‘That happened to me too’.”

In contrast, he struggles to find words to describe his sculptures, which are constructed out of twisted threads of steel and utilise light and shade, and explore mythological themes.  “I make ‘pupazzoides’ or ‘muñecoides’, which are like men with long arms, or short arms, or three fingers, which come from another planet. It’s kind of a journey of mine into the concept that there is another world, a world made of steel.”

Marco has had just three exhibitions since living in Oaxaca but is currently creating new work all while he continues to work on a new The Buonamico’s Band album. This indicates that Oaxaca can look forward to new music and an art exposition soon.

Although Marco describes The Buonamico’s Band as a “360 degree project” in terms of a global vision, it’s hard to imagine the band will ever not be an integral part of the Oaxacan music scene. Oaxaca has been good to Marco. He talks about the amazing opportunities and relationships forged out of his time with La China, and his gratitude is palpable when he speaks about the community effort that allowed La Dolce Vita to be produced last year.

“Without the help of various bars, and mezcal brands, I couldn’t have made the disc. Oaxaca is amazing for that, knowing people who can help. I tried to apply different sources of funding, but in the end I ended up doing like crowdfunding campaign but live, and face-to-face. I would knock on doors and say, ‘Hey, I need help with this’ and that was that. I don’t know about in other places, other states. But for me, that was incredible”.

7 unique musicians coming together to form one unified band that is uncategorisable, but unmistakable.  A global vision, rooted by strong local networks. A frontman who writes accessible, relatable lyrics yet also wields metal into impossible shapes. The word for that just might be “equilibrium”.