In the shadow of Oaxaca’s towering achievements in gastronomy and resplendent textiles, its world-class libraries rarely get the attention they deserve. In fact, Oaxaca boasts a glut of beautiful, tranquil, accessible places to read, work, and learn.

The presence of the Dominican order in Oaxaca means a centuries-old library history. Dominican friars were keen readers, archivists, and librarians. However, Dominican libraries were not the open access, free-wifi scholarly utopias we know and love today. In fact, in 1919 La Biblioteca del Estado was the only public library in the city. But the 20th century saw a proliferation of educational institutions, libraries, and archives. Today, you can find a library for every day of the week offering books, workshops, concerts, plays, lectures, or just a place to sit and busy yourself.

These libraries include state projects, such as the public library on Alcalá, various university libraries, and the surprisingly immense Historical Archive in la Ciudad de las Canteras. Many of these cultural institutions are endowments from private citizens, not unlike New York in its heyday. Take Alfredo Harp Helú who, through Fundación Alfredo Harp Helú, runs a handful of brilliant open-to-public spaces and funds many social initiatives. I think Oaxaca deserves to be known as a city of libraries, and here are six reasons why.

The Biblioteca Infantil in Xochimilco is a beautiful modern building of curves and slopes; a stylish library in a stylish neighbourhood. The books are predominantly for young readers, but the place is special for its ample outdoor space. Well-landscaped, shady grounds are perfect to exhaust a child, while you enjoy good wifi and workspace. The library regularly hosts school trips, and it’s not uncommon to have a gaggle of high-spirited school children gasping incredulously at a lecture on Egyptian mummification, or falling over themselves to guess how many moons Jupiter has. 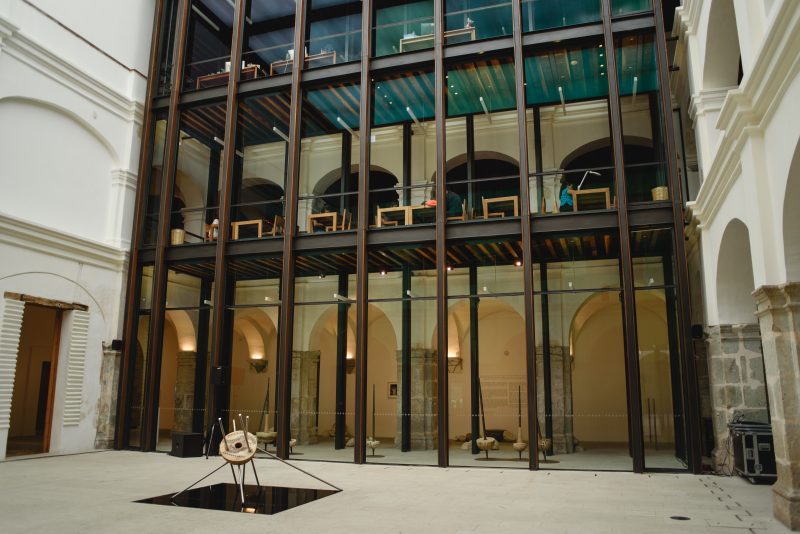 The 16th-century convent of San Pablo is now home to a cafe, restaurant, chapel, exhibition spaces, and the Juan de Cordova Library. The Dominican architecture has been given a modernist makeover with steel and glass and is so well done I sometimes think I might be in a Dan Brown novel. The library’s collection is great for Oaxacan anthropology, in particular, indigenous languages and histories. An advantage of this library is that you don’t have to check your bag as you do in most. A disadvantage is that the toilets are a long way away from the reading rooms. The young staff imbues a laid-back attitude but don’t hesitate to ask for help as they wander around. 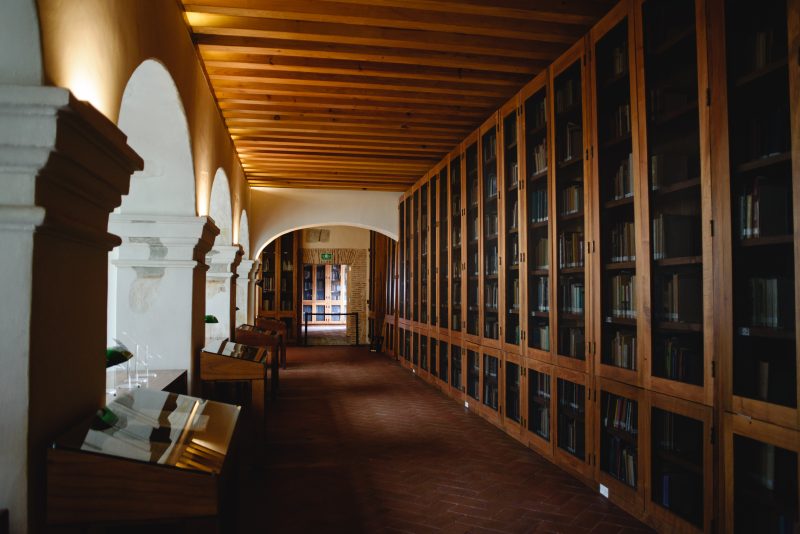 El Archivo General del Estado de Oaxaca is the second most important archive in Mexico, dedicated to the restoration and safeguarding of historical documents. It opened in 2016 and is well worth a visit just to see the building and its grounds. This fortress-like library is a Brutalist vision of concrete and cactus. As well as the immense archive collection, there’s an extensive children’s library. Just next door is the Ciudad de las Canteras park complete with an amphitheatre and a turtle-filled lake. It’s an oft-overlooked end of the city well worth an afternoon’s visit. There are guided visits of the archives in Spanish on Tuesdays and Fridays at noon. 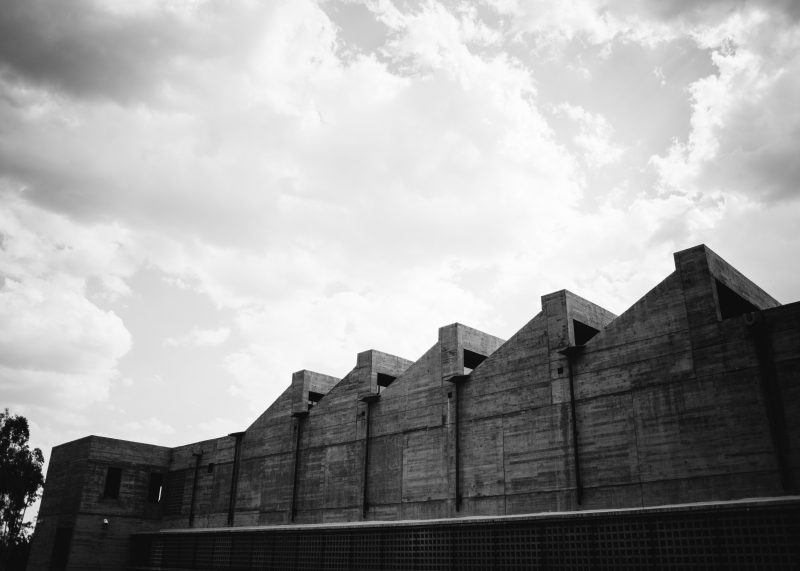 Not many people realise that Oaxaca’s IAGO houses one of Latin America’s most important graphic art libraries. The school was set up by renowned Oaxacan artist Francisco Toledo and its library really does have any book on art you could want. The single-storey building opposite Santo Domingo is a warren of reading rooms, exhibitions, an art shop, and a shady courtyard covered by a roof of bougainvillea. The courtyard is often abuzz with language exchanges, private classes, and gossip. It’s also worth knowing that wifi will set you back diez pesos. 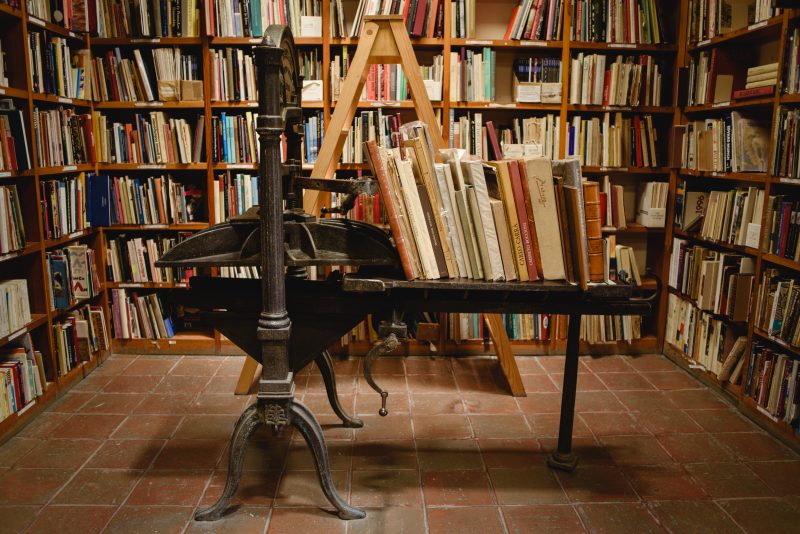 The Central Public Library can seem modest compared to the likes of San Pablo and IAGO, but is still a tranquil spot to read or work. Central by name, central by nature it’s on Alcalá, next to MACO, the contemporary art museum. Like any good public library, it has a wide-ranging book catalogue, a large computer suite, and a floating population of newspaper reading locals. If you’re a teacher, there are restrictions on teaching classes here, so ask beforehand about rules. Like all the libraries on this list, The Public Library has some great events going on. Recently they held a tournament of blind dominos, both for long-time players and anyone who wanted to give it a try.

The Biblioteca Henestrosa is another of Harp Helú’s cultural projects and recently celebrated its quince años. From the outside, the rich egg-yolk yellow building dominates the corner of the block. Enter the grand white courtyard featuring spindly vertiginous plantlife, a cool retracting roof, and ever vigilant policeman. The reading rooms are off to the left and right of the courtyard with over 60,000 books, focussed on the humanities in Mexico. Upstairs is actually a separate institution, La Casa de la Ciudad, dedicated to projects around urbanism and architecture. Henestrosa always has a busy calendar of events: concerts, lectures, film nights, and recently, a vinyl expo. Both upstairs and downstairs usually have a temporary exhibition which can be great for a mid-reading stroll. 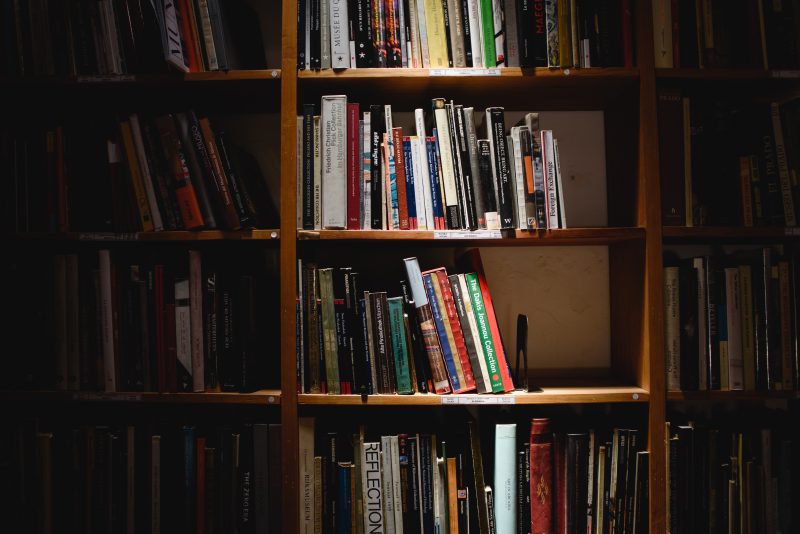