It had been a week since the black butterflies fluttered into my house. One had landed on the wall to dry and then die days later. Another appeared on the stairs; I passed even more on my nightly walk to the city centre. When I arrived at work, I discovered the black and dusty wings of another extended over the white wall. Black butterflies as auguries of death.

Days later, on September 5, the painter Francisco Toledo died in the city of Oaxaca. Ta Min, as he was also known in his native Juchitán, was one of the great drivers of culture in Mexico: he defended the native corn and the trees of a forest; he flew kites with the faces of the disappeared students of Ayotzinapa. To say goodbye, the night of his death, we met at IAGO, the Institute of Graphic Arts of Oaxaca, perhaps the most symbolic legacy that Toledo left for the world. 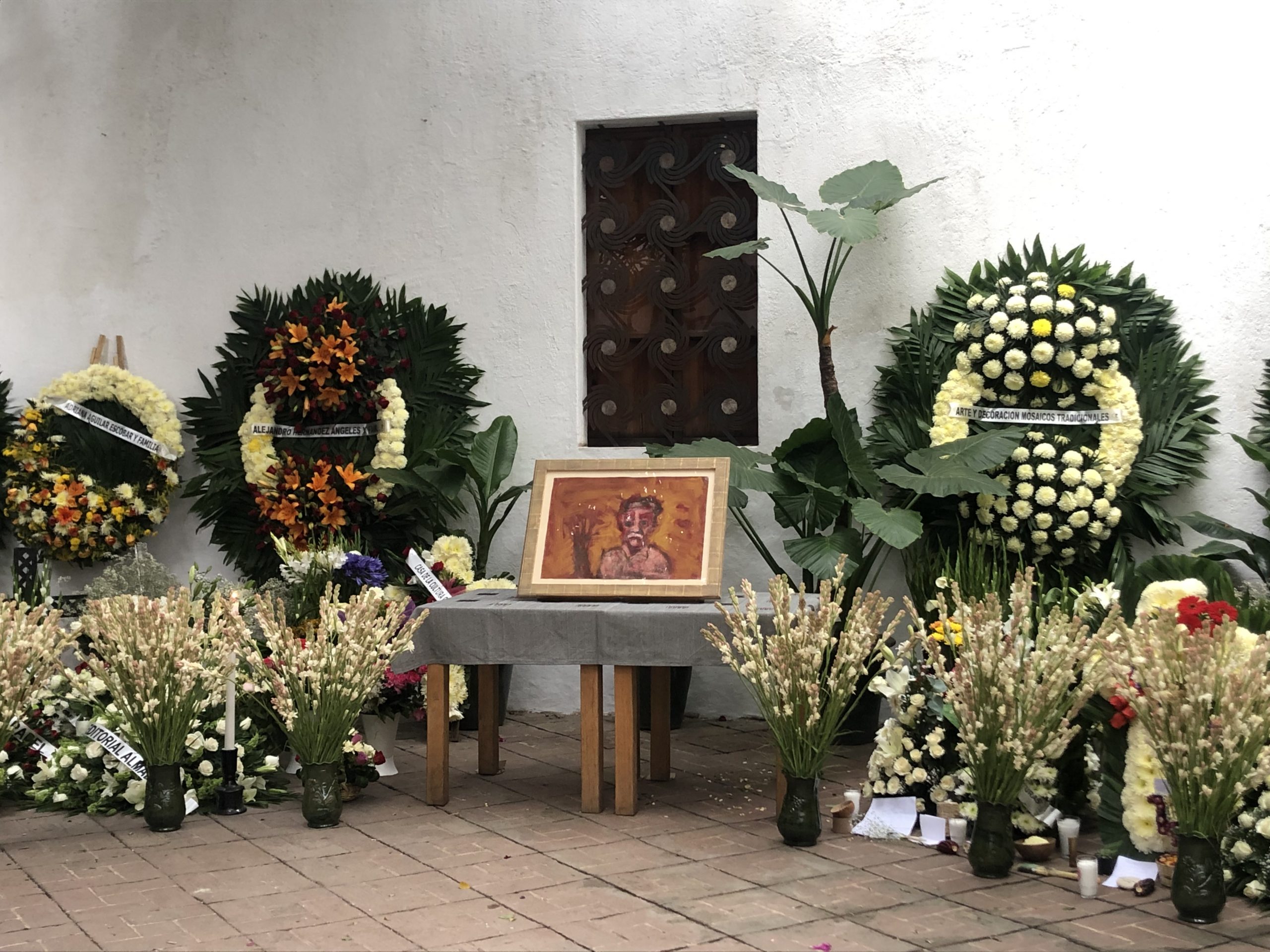 In the street, “La Martiniana” could be heard as some consoled themselves with a hug or a memory of when they met him. Cries of sadness mixed with the music of a trio surrounded by mourners. It was the revelry of a funeral for those of us who attended this wake without a body.

Rows and figures of burning candles multiplied on the sidewalk and on the steps of  IAGO to say goodbye to the artist. People came and went through the night to keep watch in the bougainvillea-filled patio. When crossing the corridor, we saw posters that reminded us of his activism:

But also, at the bottom of the courtyard, stood an improvised altar with maíz, flowers, and a photograph of Toledo tracing an engraving on a metal plate. Wreaths of flowers saturated the walls of this place that, without a doubt, was more solemn, without music or mezcal, only a Zapotec woman dressed in a petticoat and mourning huipil.

The wake in his memory lasted until dawn. There were tlayudas as a memory of the epic battle he won to prevent a McDonald’s from being installed in the city centre. “We are orphans… Toledo is the death of a resistance,” some said. But there are also those who said, “We are the seed that he sowed, we have to defend his legacy, corn, art, culture.” Meanwhile, people also raised altars in Juchitán, a city demolished by the 2017 earthquake that Toledo supported in its reconstruction. 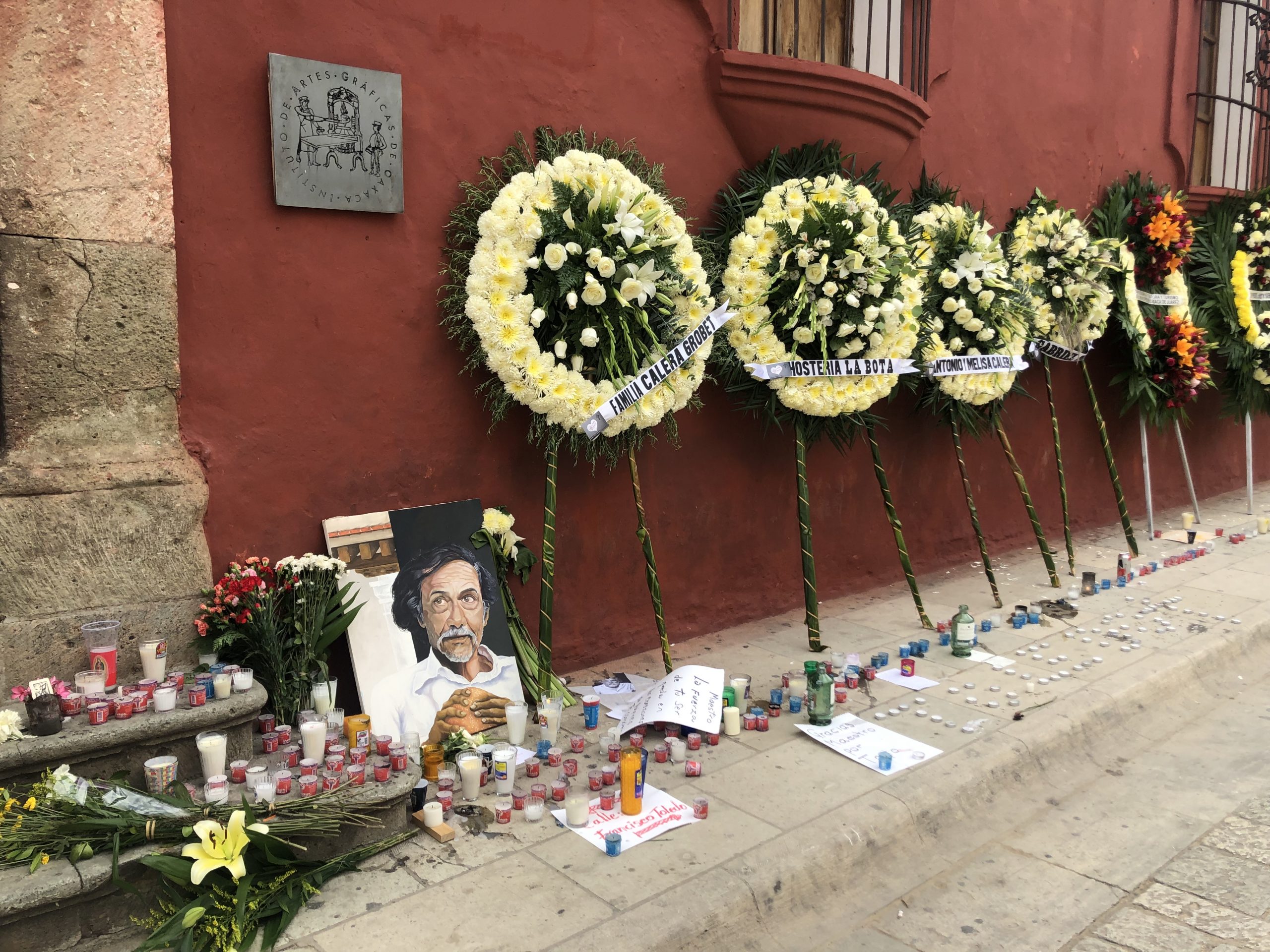 That morning, the poincianas of the nearby church of Santo Domingo oversaw our mourning and the way in which people, in an act of sadness and pride, renamed the street with the artist’s name. “Francisco Toledo,” the paper read and we all applauded. The next afternoon, a strange silence mixed with the noises of the busy plaza. Under those same poincianas, teenagers kissed and moved their legs as if they wanted to fly, they were part of a generation that grew up in the IAGO library. Then I saw that a white flock furrowed the sky. They were no longer the black butterflies, but white birds flying in a leaden sky that announced the storm, just as Francisco Toledo travelled the streets turned ash, travelling with the wind, ash scattered among the flowers of guie´ chaachi. 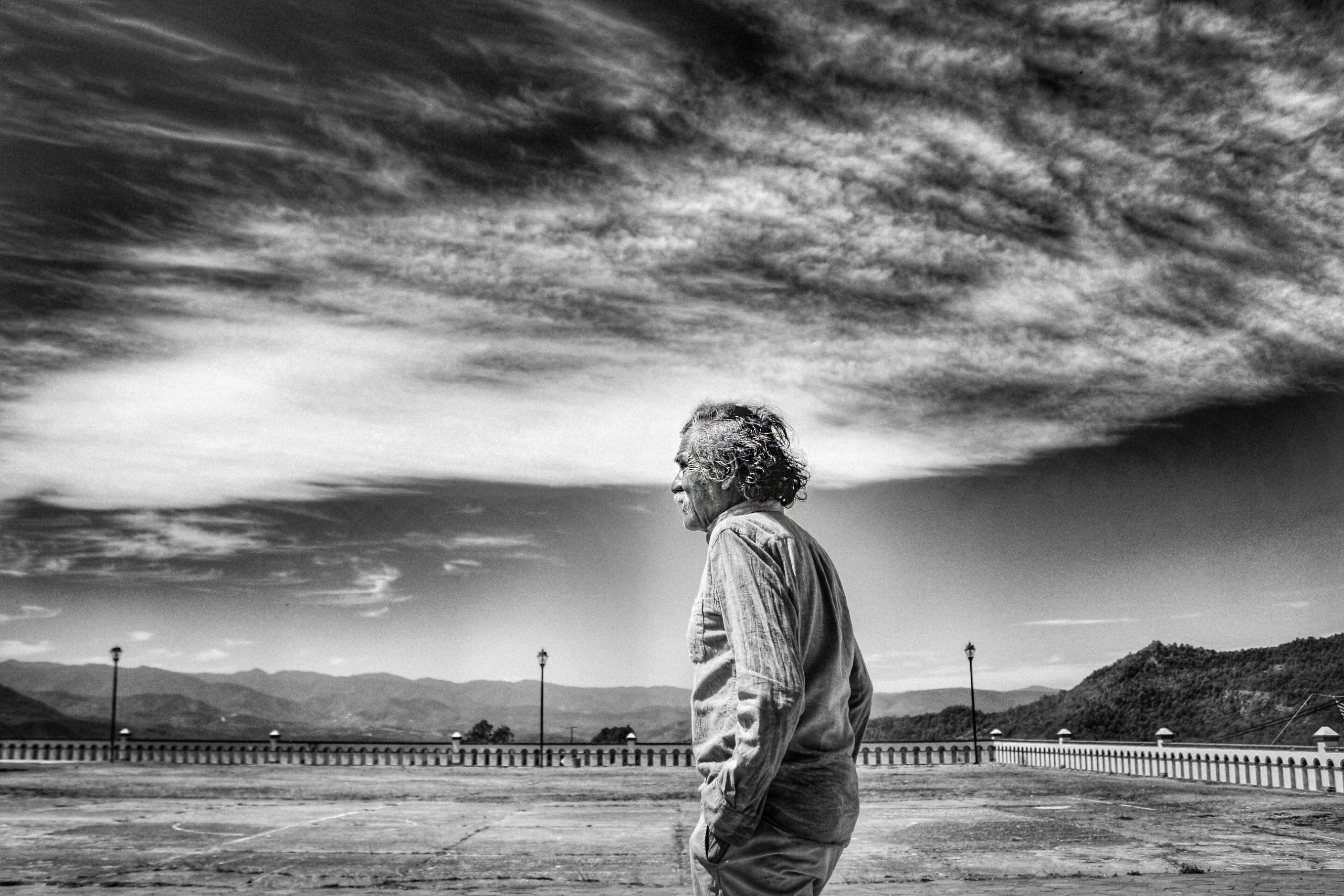