Thursday, June 24
You are at:Home»Art + Culture»Culture»Eating your way through Día de Muertos

As Día de Muertos approaches a distinctive, yet familiar, energy begins to linger in the air: A slight sense of restlessness as people run back and forth between markets to gather supplies for the altars; the bubbling excitement of having a calendar chock full of celebrations; and the coolness of the air as the veil thins in preparation to receive the spirits of the departed. There’s no denying this holiday has presence.

For many in Oaxaca, food is at the epicentre of the festivities. Between planning meals, shopping for them, cooking them, and eating them, it takes up a sizeable portion of time spent on the holiday.  If you ask most Oaxaqueños to recall their fondest memories of Día de Muertos, there is a strong chance it involves food.

While the holiday officially begins on the 31st, altars are prepared a few days beforehand and famously include the favourite foods of the departed in an effort to encourage their visitation.

It’s important to note that food, altars, and other customs vary widely between Oaxaca’s eight regions and, depending on the region, some versions may feature steps leading up to the altar, while others may include arches, columns, and other embellishments.

Fruits such as mandarins, bananas, and apples, as well as sugar skulls, candied fruits, and pan de muerto are all carefully arranged atop altars adorned with bright orange and yellow marigolds. Mezcal, hot chocolate, tejate or beer, among other traditional favourites, are also offered depending on the tastes of the departed. 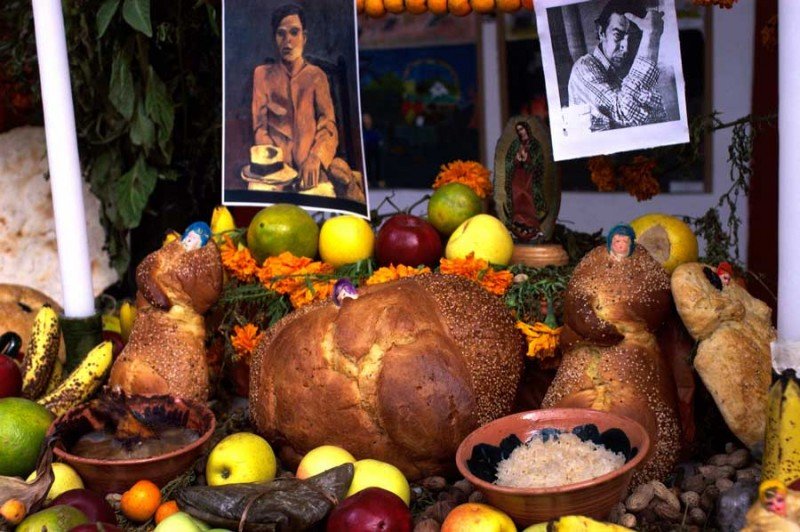 Raquel Garzón Hernández, a native Oaxacan cook who was recently featured in Lonely Planet for her traditional Oaxacan recipes, recalls a conversation with her siblings regarding what to place on the altar for their deceased mother.  “My mom had a tremendous sweet tooth,” says Garzón.

“If I were to create an altar specifically dedicated to her we would have to place pan de sal which is a salty bread that is sold in Tlacolula and Etla, and is typically used for tortas. However, my mother would buy this bread and smother it with honey–she was completely obsessed. She also loved dulce de ciruela. She was not your typical mole lover!” she says with a laugh.

When it comes to food that is eaten during the celebration, it is not uncommon for people in many villages to raise or hunt animals to be consumed specifically for Día de Muertos. Turkeys are raised for mole, deer are hunted for venison, and in some towns iguanas are hunted to prepare tamales de iguana.

Despite the regional variations in food, tamales, mole negro with pollo and rice, chocolate, and pan de muerto are some of the staples many Oaxaqueños enjoy.  Preparation of these dishes is no small task. Each one is complex and unique, often requiring many ingredients that are bought well in advance of the holiday. 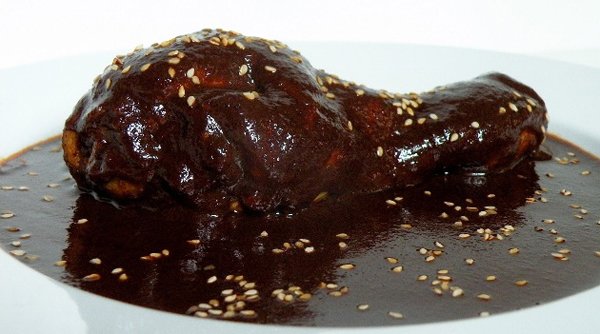 Garzón Hernández fondly recalls memories making chocolate with her family. “Eight days before the festivities my mother would go to the molino to pick up the cacao, cinnamon, the almonds, and sugar, and my grandmother was the one responsible for grinding the cacao beans,” she explains.  “Then, us children would take the finished chocolate and mould it into little figurines and have a contest to see who could create the best ones.”  Garzón Hernandez’s mother would then store the chocolate in a glass jar to let it cool, and bring it out during the celebration to prepare the morning hot chocolate.

As anyone who has celebrated Día de Muertos in Mexico knows, it is a festivity that is better lived than described. There is an essence to the holiday that simply cannot be put into words, but that needs to be experienced directly to honor its full complexity and respectful joy.

Check out these recipes below to kick start on your own Muertos celebrations.