Peter Liashkov‘s latest exhibition L.A. Random recently opened at Oaxaca’s Museum of Contemporary Art (MACO).  Focusing on Latin culture in Los Angeles and themes such as immigration the exhibition documents the spirit of the Latin community that has been present in California for the last two hundred years.  Steve Tierney spoke with the artist during his recent visit to Oaxaca.

Can you give me a quick introduction to the show? How did the exhibition in Oaxaca come about?

I came here because some friends from L.A. told me that there’s a wonderful institution called CASA. I was thinking of doing a residency there, and so from there someone introduced me to the director of this museum. At the time I was doing this work that has to do with L.A. and the presence of the Latino community in Los Angeles. This particular show is called L.A. Random and these are street posters that are superimposed with images of the Latino Community in Los Angeles; not only Mexican, but also Salvadoran… basically Latin American people who have immigrated.

I’m doing this because I learned Spanish in Argentina when I was a kid. I did my formative years there, I spent six years. I did a residency there two years ago, basically to reappraise all of my formative years over there and when I came back I just realised, even though I’ve traveled throughout the world quite a bit from my base in Los Angeles, I realised that the Latin presence is very strong in my psyche. The language first of all, which I’m fluent in. Then, I began to see things in L.A. that I wanted to express and the base of these posters was very graphic, very strong wording, but somehow the emotional impact was not there. So, I started superimposing images that I had taken from my iPhone on top of these posters, specific people that are friends, or things that I’ve taken, combining a sense of nostalgia for their culture.

Also, I see myself as almost like a Dutch painter who actually catches a moment in a landscape in Holland in the 16th century. These are contemporary images that I super imposed in a Rauschenberg kind of way. They are documents of this spirit of a Latin community that has been present in California for the last two hundred years. 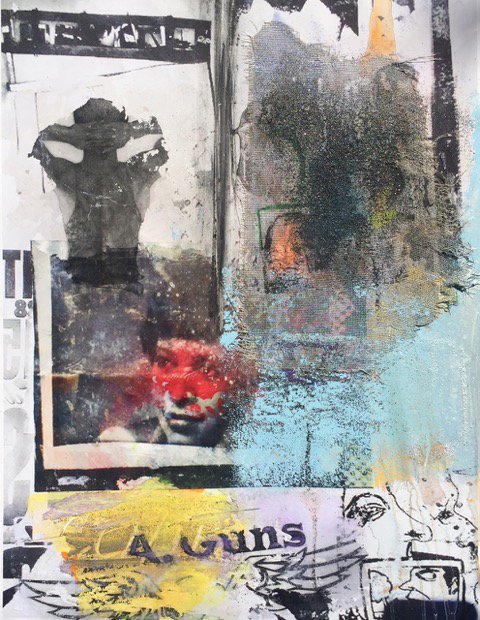 Has L.A. Random been shown before?

No, the first time.

Where does the title come from?

It’s my title. L.A. Random. For me, it’s random. It’s almost like driving in a car. You see images that are kind of bombarding you, hence random, especially in the neighbourhoods where I live.

No, the initial base is a poster that’s taken from a specific location.  When you have an event you have an image and I’ve taken that image and used that as a base.  Not only that, but the name of the poster is where the image is taken from. So all the images come from photographs, drawings, collage elements, or textures like crushed glass or earth. Then, there are also images from templates from the código postal, the zip code. There’s an element of transparency in all of the images and there’s sort of space in them because some of the images are covered with translucent Mylar so there’s an image on both sides.  They’re almost like reflections from windows. 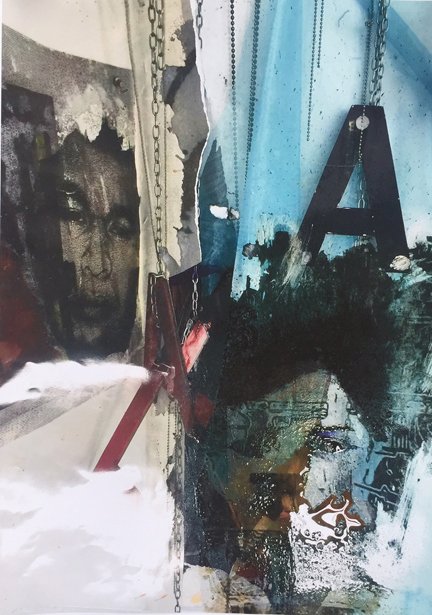 Focusing on the idea of immigration, is your family history something that’s important to you?

It’s very close to me because, first of all, my parents are Russian and my father was an immigrant in France in 1922. He came fighting the Communists to France. He worked in a car assembly and then worked himself up to being a chemist. Then, because of all the immigration issues in France in the 40s, they decided to go to Argentina because there was more work. We got to Argentina and the work was there, but it was not conducive to making a living. We had relatives in the States so we got there when I was 15. I had to learn another language, which was fairly easy. I got my art education in the States, although I had a Russian teacher as well. I have a pretty strong traditional background. I’ve been a professor at art school and I’ve been through a lot of styles.

I’m interested in you arriving in L.A. as an immigrant, especially as a teenager, and how you got into art.

I had a Russian teacher who was a very traditional teacher in terms of Bozar education in Russia and I became his apprentice. Then, I worked to get my MFA in L.A. at Otis Art Institute and then, gradually, I began to make art. Then, I started teaching and went back to Europe two or three times to soak up tradition. 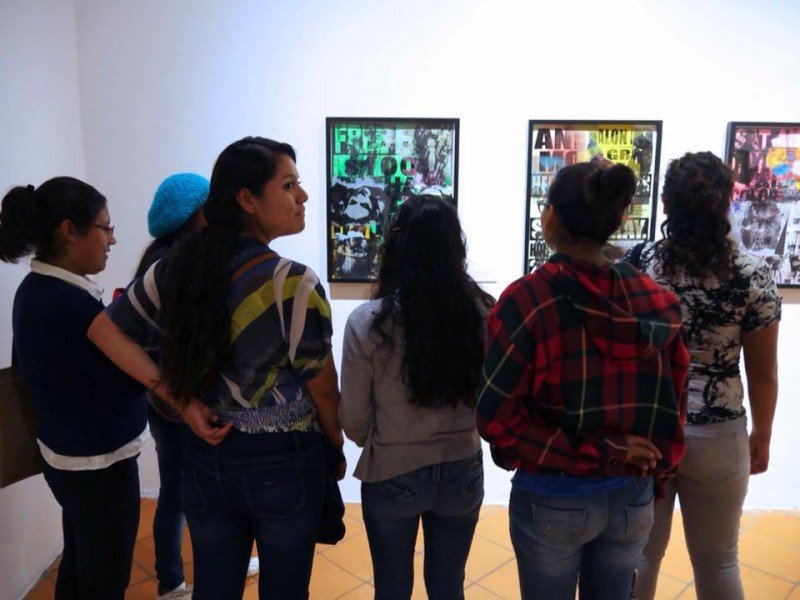 In the early years, when you were at university, were your influences were mostly from the U.S. or did you look into art history as well?

My influences are interesting because I grew up in this kind of bubble of Russian Impressionism. Russian Impressionism is very much like Sargent, using bravura painting. That style was my background. But, I went back to Europe a couple of times to soak up Velazquez and Rembrandt and all that stuff. After I graduated from Otis Art Institute, I went back to Europe for the second time. I went to Germany and at the time Germany was booming as an art capital in the 70s. Pop art, Rauschenberg and Claes Oldenberg were all over the place in Europe. But, actually what’s interesting to me is that I was not into that stuff, although I was familiar with it. I was much more interested in German artists like Joseph Beuys and Wolf Vostell who were sort of products of a European history with all the baggage of post-war stuff. That’s what I absorbed from that trip.

I did use some of that stuff in my earlier work. I did a series that had to do with L.A.. L.A. to me was not the L.A. of Hollywood. It was the L.A. of construction, implosions, immigration that I brought my European baggage into that, which I’m bringing back thirty years later, but in a kind of Latin context. A lot of history. I went through an abstract period, which I had to kind of absorb through Russian constructivism. I absorbed that and then the figurative element, which comes out of going to Italy and seeing all of that Roman sculpture.

I have one other question involving your teaching history. You were saying your teacher was quite influential to you. Do you think that relationship is important, as an artist learning from someone else and having that mentor?

It depends on the personalities. I come from a crystalized Russian intention that is not post-Soviet. It’s pre-Soviet. There are differences. You know I have friends who are post-Soviet who have come here later, and they’re Soviets. They grew up children of a Soviet society. Mine is Russian immigrant that comes before that. That has some kind of differences. A lot of the immigrants that I meet post-Soviet, most of them are Jewish, and I’m not. Russian Orthodox is part of my baggage, and I look at that stuff, but it’s not part of my imagery. Although, in terms of design, who knows, in terms of the symmetry of the icon. 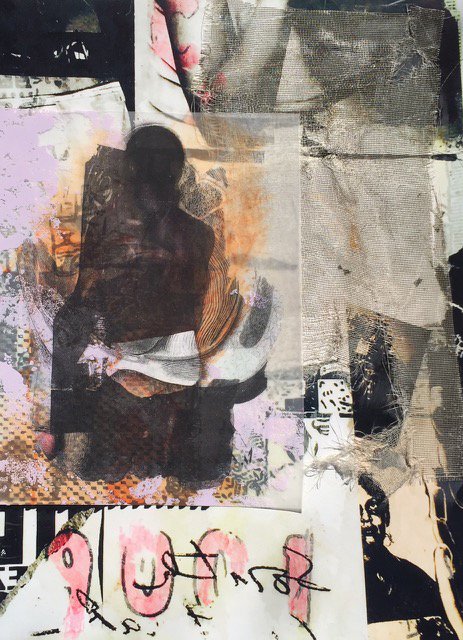 Do you have any further plans to work in Oaxaca?

I want to come back to Oaxaca. I have a project that’s developed by a curator here, Marietta Bernstorff. She lives in Oaxaca. She travels to the States doing shows and curating shows. The project is to collaborate with artisans from Oaxaca, and supposedly I’m going to collaborate with a weaver from Teotitlan del Valle. We’re going to do something together. I have a base for it, but Marietta keeps insisting that this has to do with what the weaver wants to express. I already have an image that I want to do, and she wants to document the dialogue between the weaver and me. And it’s great because I speak Spanish.

Are you traveling around while you’re here?

No, I’m here for a few more days because I’m supposed to collaborate with this weaver. I’m here until Friday but, I’m going back home because I have show that deals with immigration in L.A. that I’m working on.

I guess living in L.A., Mexico is not that far?

It’s not. I have a couple of shows in Ensenada, a self-portrait show. By the way, Ensenada has fabulous museums. Baja California has amazing museums. They were constructed probably ten years ago and they’re just great. There are usually good shows, and they were done by the state. I did a show last year. I did a show in Mexico 20 years ago about the comic Cantinflas. You have probably seen his image many times in Mexico. He is the Charlie Chaplin of Mexico. He represented the common man, and he’s done probably 120 films from the 30s on through the 60s or 70s actually. He’s a well-known figure in entertainment in Mexico. When he died, I was there in Mexico City visiting and I was going to do a show at a cultural center that had to do with Russian culture, but when I was there, it was his funeral. The Bellas Artes was covered in black and people were visiting his body, his effigy. So, I said, this is great, and I did a show about Cantinflas, and this is 25 years after his death. I reinterpreted the show in Ensenada this year. It seems like I’m me estoy latinisando mas y mas.

L.A. Random is at the Museo de Arte Contemporáneo de Oaxaca (Alcalá 202, Centro) until the end of November. 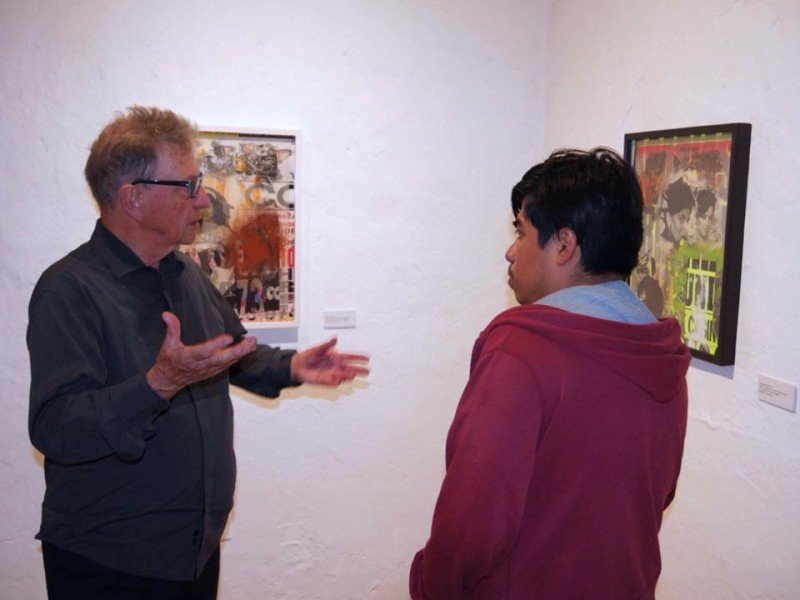