Friday, June 25
You are at:Home»Things to do»Day Tour To Hierve el Agua

Arguably one of Oaxaca’s most visited tourist destinations, Hierve el Agua has captured the attention of many visitors both nationally and internationally.

The calcified “waterfalls” located in the municipality of San Lorenzo Albarradas have been formed over time by the mineral rich water that continues to spill over the mountain’s edge, creating what appears to be cascading waterfalls.

For anyone who has not yet witnessed the splendour of Hierve el Agua and is looking for an active and immersive experience, Coyote Aventuras offers an opportunity through their one-day hiking tour, which also includes a hike to Las Salinas waterfalls in San Baltazar, Guelavilla.

Our small group of six departed from downtown Oaxaca at 7am in order to beat the midday crowds and experience the stunning and expansive mountain views without distraction. We arrived at around 9am and were one of the first groups there.

We made our way through the entrance which was crowded with vendors selling snacks, fresh fruit, and cocos, arrived at the reflective pools where we were immediately taken in by the view. 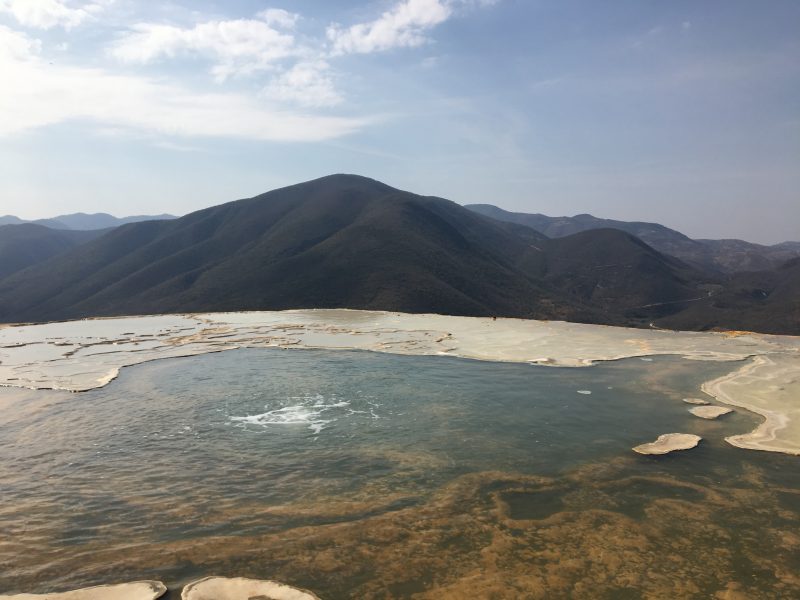 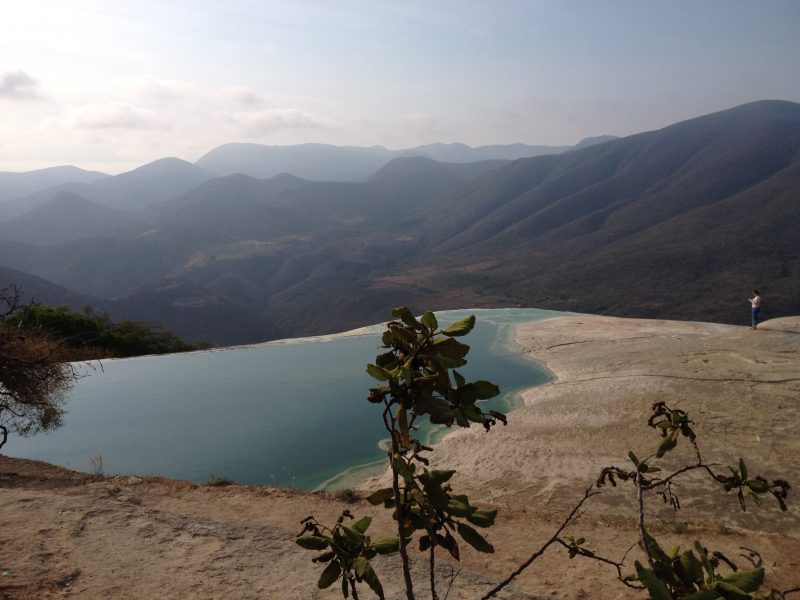 The pools mirrored the clear morning sky and stretched out to the mountain range ahead. Our guides Carlos and Fernando explained to us that the term Hierve el Agua (Water That Boils) is a misnomer, considering the water is not actually hot, but instead bubbling from cool natural springs on the mountaintop.

We took our time bathing in the water and taking in the views and eventually hiked down the side of the mountain to another platform where there was a smaller, reflective pool. Another short hike later and we were standing on a tiny platform within the walls of a breathtaking petrified waterfall, just inches away from a steep drop. 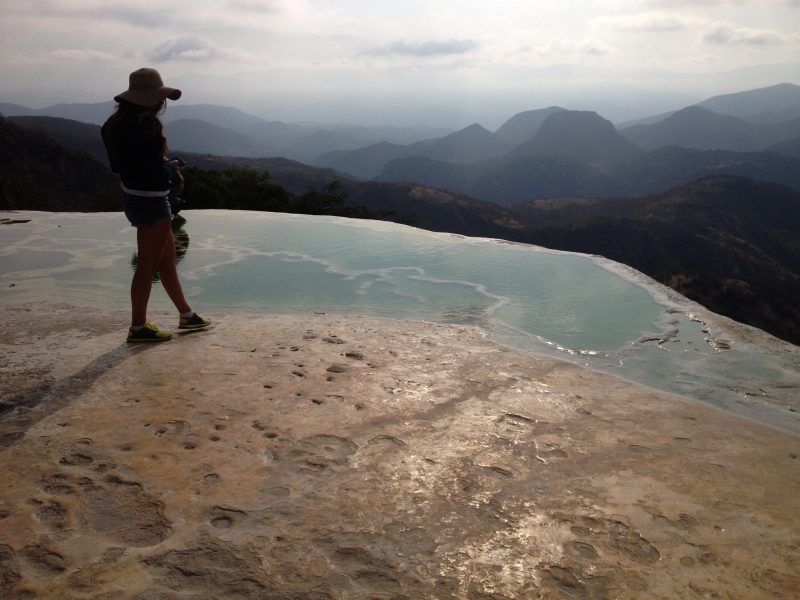 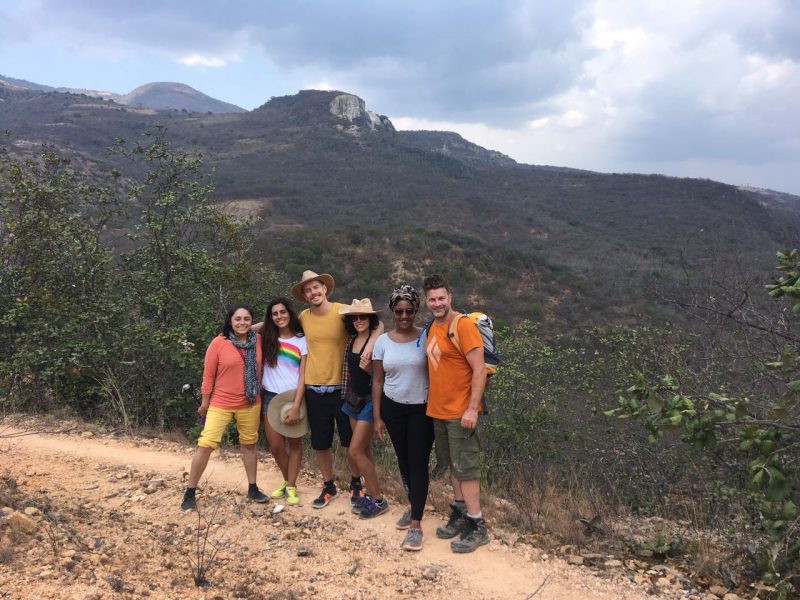 To say this hike isn’t for the faint of heart may be an understatement, however Carlos was always within arm’s reach in case anyone needed a lift up or a step down.

After leaving the second waterfall we made our way to a rocky trail where we began our hike toward the Las Salinas waterfalls. The path was rocky and steep in many places, however a somewhat cloudy sky provided some reprieve from the typically sweltering midday sun. After about two hours we arrived at the waterfalls, which also feature a number of natural dipping pools supplied by underground springs.

Sweaty from the hike, we stripped down to our bathing suits and wove our way through the watery maze until we arrived at the falls. The water was fresh, pure, and thoroughly enjoyed after our two-hour trek. Similarly to Hierve el Agua, the water at the Las Salinas falls contains many minerals, which over time have created unique formations on the walls that surround it. 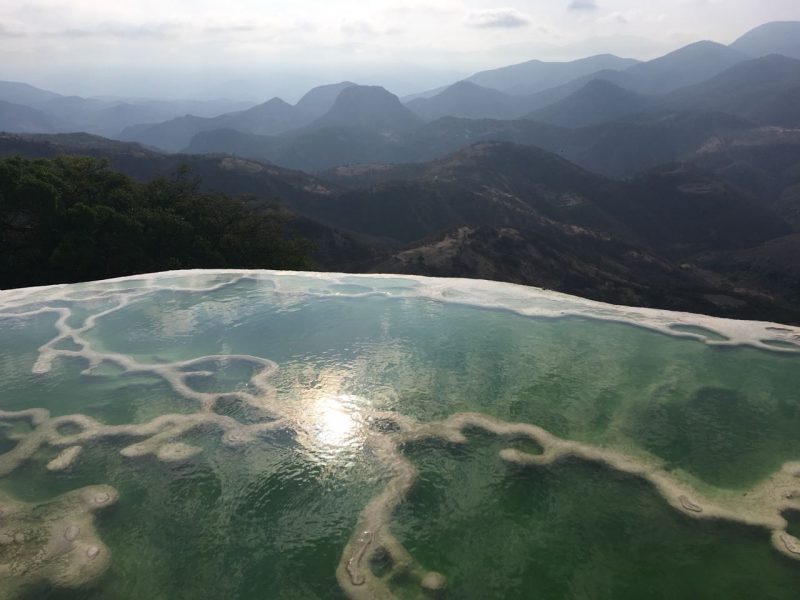 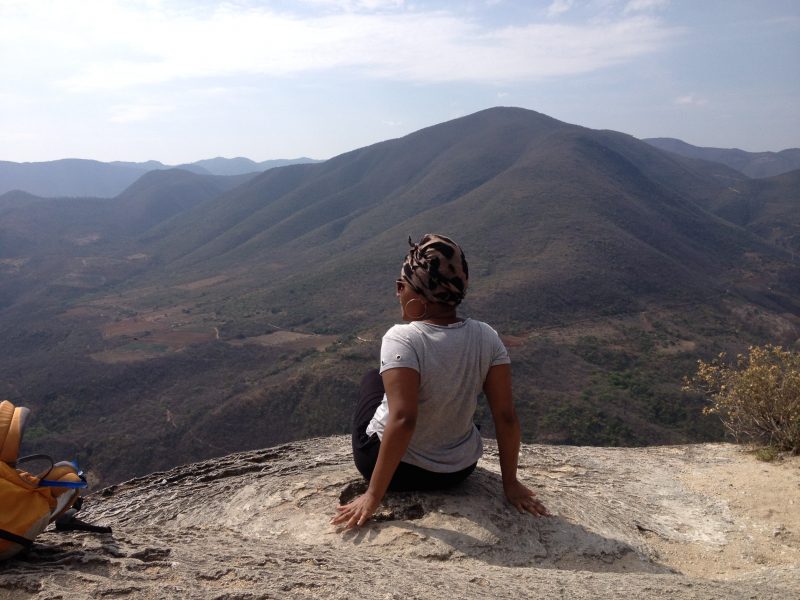 After refreshing ourselves at the falls the group took a short mototaxi ride to the center of San Baltazar, Guelavilla, where our bus was waiting to take us to our next and final stop.

To wrap up our long day, we headed over to the town of Santa Maria del Tule to dine at El Milenario where we shared regional plates such as mole, tlayudas, memelitas, and a variety of other side dishes. Afterwards, we walked over to the town’s famous Tule tree, which has the distinction of being the tree with the widest trunk in the world.

As evening had already arrived, many of the tourists had left for the day, and only a few townsfolk lingered around the small, tidy, plaza chatting and enjoying the cool evening air.

After paying the entrance fee of 10 pesos we wandered into the plaza where the tree stands, located in front of a small Catholic church. To many, the gnarled roots and branches of the tree contain hidden figures and faces, which were charmingly pointed out to us by the “guía niño,” who outlined them with his laser pointer. Visiting Tule was truly an excellent way to end a long, but very worthwhile day.

If you are interested in seeing Hierve el Agua from an entirely new angle and getting in a good workout while you’re at it, Coyote Aventuras is an excellent choice. For more information on tours and how to book, visit www.coyoteaventuras.com/.