Sitting on his wooden chair, with his big 80’s typewriter in front of him, Carlos, 79, resists the tackle of an era full of automatic writing correction tools. “I prefer the human touch, the human contact, and sadly, we are losing it,” he states firmly, eyes overflowing with melancholia.

For some of you this concept is familiar, but actually, for the majority of our readers – locals and foreigners alike – the idea of such a profession might produce more questions than answers. An escritorio público (public desk) is a person who gets paid by people from different walks of life to compose and type personal letters as well as public documents for all kinds of purposes such as family anecdotes, messages, recommendation letters, job applications, and monetary requests for local or state governments. In other words, an escritorio público could be understood as the people’s writer, someone who helps them get what they need.

Carlos and I had agreed to meet at his stall inside Benito Juárez Market. It was around noon and the market was buzzing with vendors, shoppers, tourists, and musicians, but Carlos sat behind his desk, composed and unfazed by the chaos. “I thought you weren’t going to come,” he said as soon as he saw me. “Young people sometimes don’t care about manners.” I took this hint as a compliment and smiled, “Of course I came, Don Carlos. I really want to talk to you.” It seemed, to me, I had passed my first test. And so it was – Carlos immediately smiled back and looked more relaxed, ready to start our conversation. 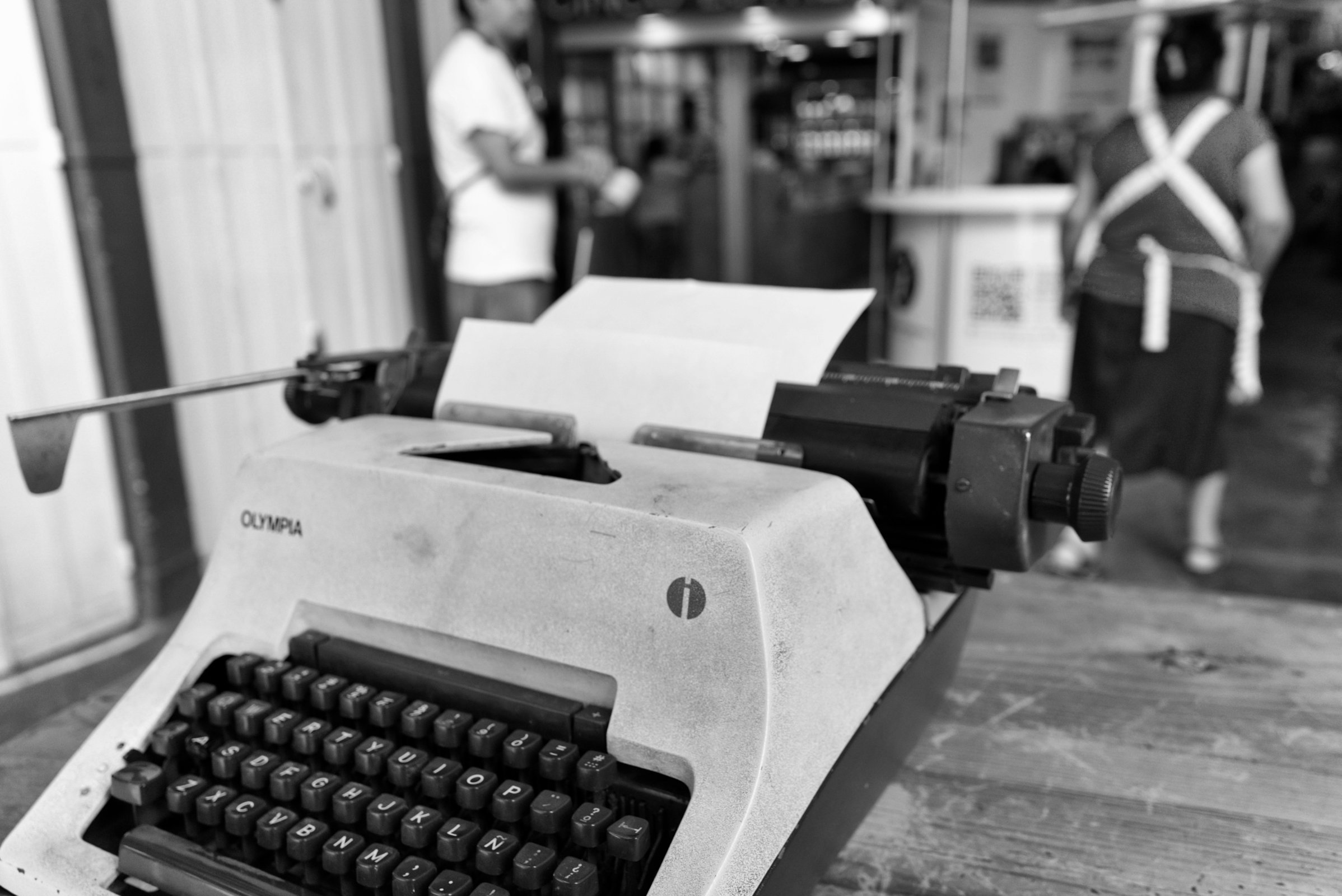 For how long have you been doing this, Don Carlos?

“For 30 years,” he said without hesitation. In my millennial mind, the idea of becoming the city’s escritorio público felt like an odyssey, like a position that needed to be achieved after some kind of rite of passage.

How would a person become one? Do you inherit the position?

Carlos laughed at my naïve assumption, erasing the epic story I had written in my head. “I was in the Mexican army and used to live in México City, but after many years I retired and decided to come back to Oaxaca, my hometown, at some point in the 80s,” he said. And then I noticed a slight change in his tone. “After coming back I became very fond of drinking, and so my wife kind of gave me an ultimatum ‘you either work or you work.’ So I came here to the market and set up my public writer stall. Back then, there were many more like me. It was just like any other profession with a large number of professionals doing it.”

I have to say I felt quite foolish after hearing that. There I was, in front of a man whom I perceived as a guardian of a doorway to the past while he, unpretentious to the bone, kept saying, “Hey, I’m just another guy.”

But why did I have that feeling? Well, because, although in the past Carlos was just another one of the many escritorios públicos in town, currently he is the last one standing, and that already makes him quite special.

You must be very good at writing and grammar, aren’t you?

“Well… kind of,” he answered humbly, leaving me amazed by his modesty. “I mean, I do write well and know the grammar rules, although I learned them many years ago when I was in high school. But I would say the real deal here is not only about writing correctly, but about writing well. For example, if you are going to ask the government for some kind of economic or in-kind support, it is not the same to say, ‘Hey, I want some money to invest on my farm or whatever, give me some now’ as to politely ask and explain the situation and make the point of why you need the money and why it will be beneficial for both parties. This is something young people are starting to forget. They no longer appreciate the beauty of the form, they only care about doing things fast.” This quick-solution pace of life is no doubt the reason Carlos is the last escritorio público of the city.

What happens when you decide to retire? Will this profession disappear?

He must have thought about it many times because his answer was sharp and resolved. “I am doing this until the day I die, and after that, my daughter will succeed me. She told me so, but she might bring a computer.” He sat staring at his typewriter. “But it is not the same,” he continued. “A lot of people like how machine-typed documents look. There are actually some students who come and ask for my help because their schools are going back to the old typing style. For design courses, I think. It has to do with the quality of the materials.”

Although this is slowly happening, Carlos is sure typewriters will eventually stop being a writing instrument for the masses, just like people’s patience. He is okay with that transition, but he doesn’t quite get it. “The typewriter is better, it doesn’t consume electricity and it is cheaper to fix. I have had this machine for years. When you type on it you have to be very careful. You have to think about the accents and the punctuation. You have to be focused and you need time for that.” He kept staring proudly at his machine as if he was typing something in his head. 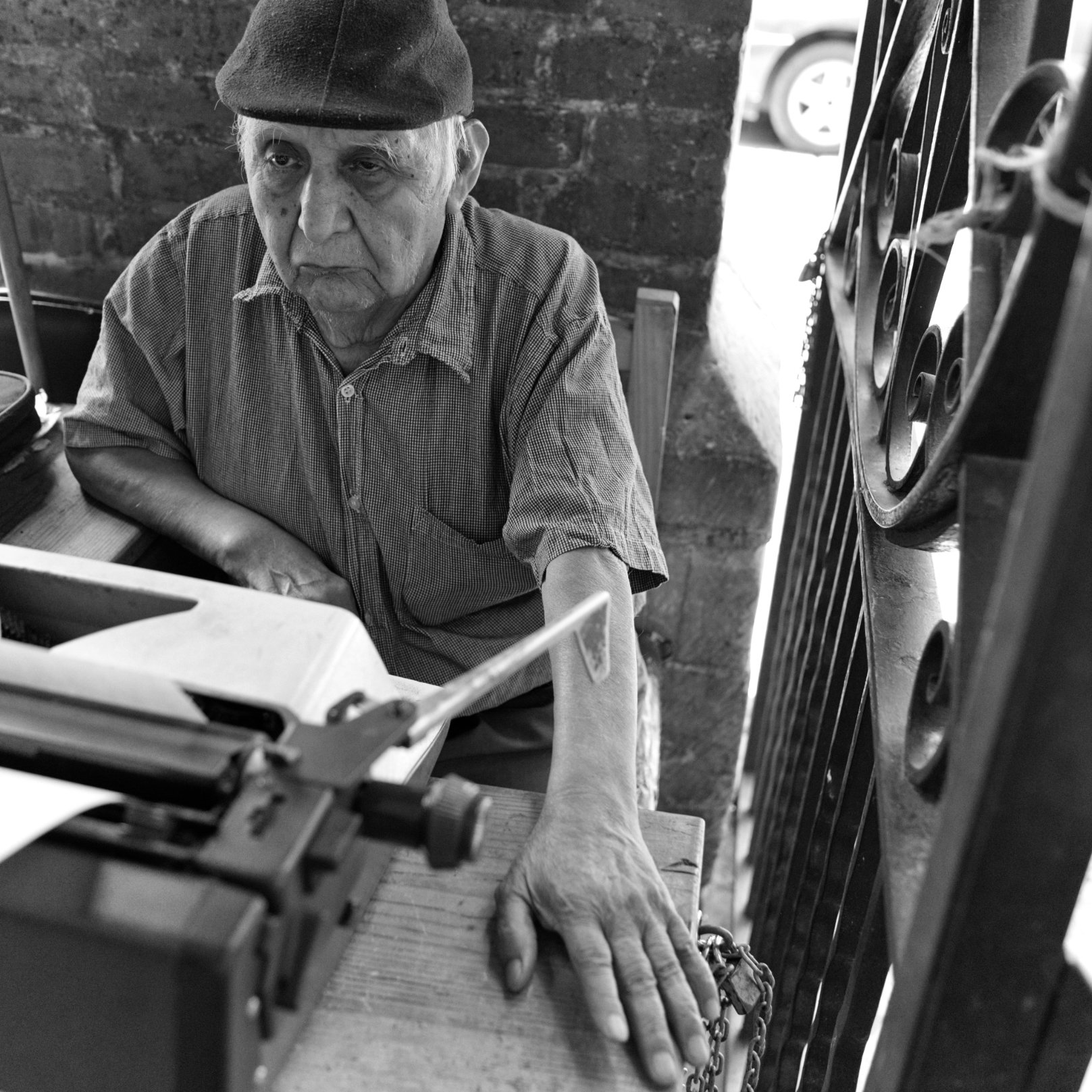 Carlos, I think you have the soul of a poet You like to work with language and you reflect on time and life a lot. Don’t you think so?

“Oh no, I’m no poet, what are you saying?” he asked. He refused that comparison with a selfless spiritual attitude. I insisted.

Are you sure? What about the love letters you write?

Escritorios públicos – back in the old days – were famous for writing love letters…  He started laughing. “Nobody writes love letters anymore. Courtship is long gone. I haven’t written one in years!”

“Well, just a few times, this tradition was already disappearing back when I started.  But I do remember one client telling me I would end up stealing his girlfriend’s heart if she knew me.” His voice sounded amused by the recollection.

He continued, “This is a good job, you have a lot of time to sit down and think. You help people get what they need by ordering their ideas. But it is not a piece of cake either, sometimes people don’t accept being corrected, or sometimes they only want you to type a bunch of rude words I wouldn’t dare to repeat in front of you. In the end, just a few say thank you.” Carlos pointed out, with the sharpness only wisdom and time bring. “But it is an honest job and that’s all that matters.”

Carlos words made me think about how we tend to romanticise things, just like I had done with him before our conversation. I wanted to hear about love stories but I got philosophical riddles instead. He told me that sometimes we take ourselves and our lives too seriously, looking for credit and fame, wherein all that matters is that you are doing something that feels ‘right’ regardless of others’ opinions.

However, I feel that a man who has been showing up every weekday for the last 30 years to his stall to wait for someone to ask for his language and ideas does need to be acknowledged. We said goodbye and I reminded him I was writing this piece about him because a lot of people thought his work was really special. He smiled and ask me to keep him posted. I left with the feeling I had been in another dimension, where the clocks moved slower and patiently.

I thought about the bold lush letters of the freshly-typed documents Carlos showed me. “You see, this will not fade, not like a printed document. The typed documents have a better quality.”

I passed a computer shop on my way home. Monitors irradiated their light on the ivory shelves. Not everything that shines is gold, I thought. It can be ink from a typewriter. 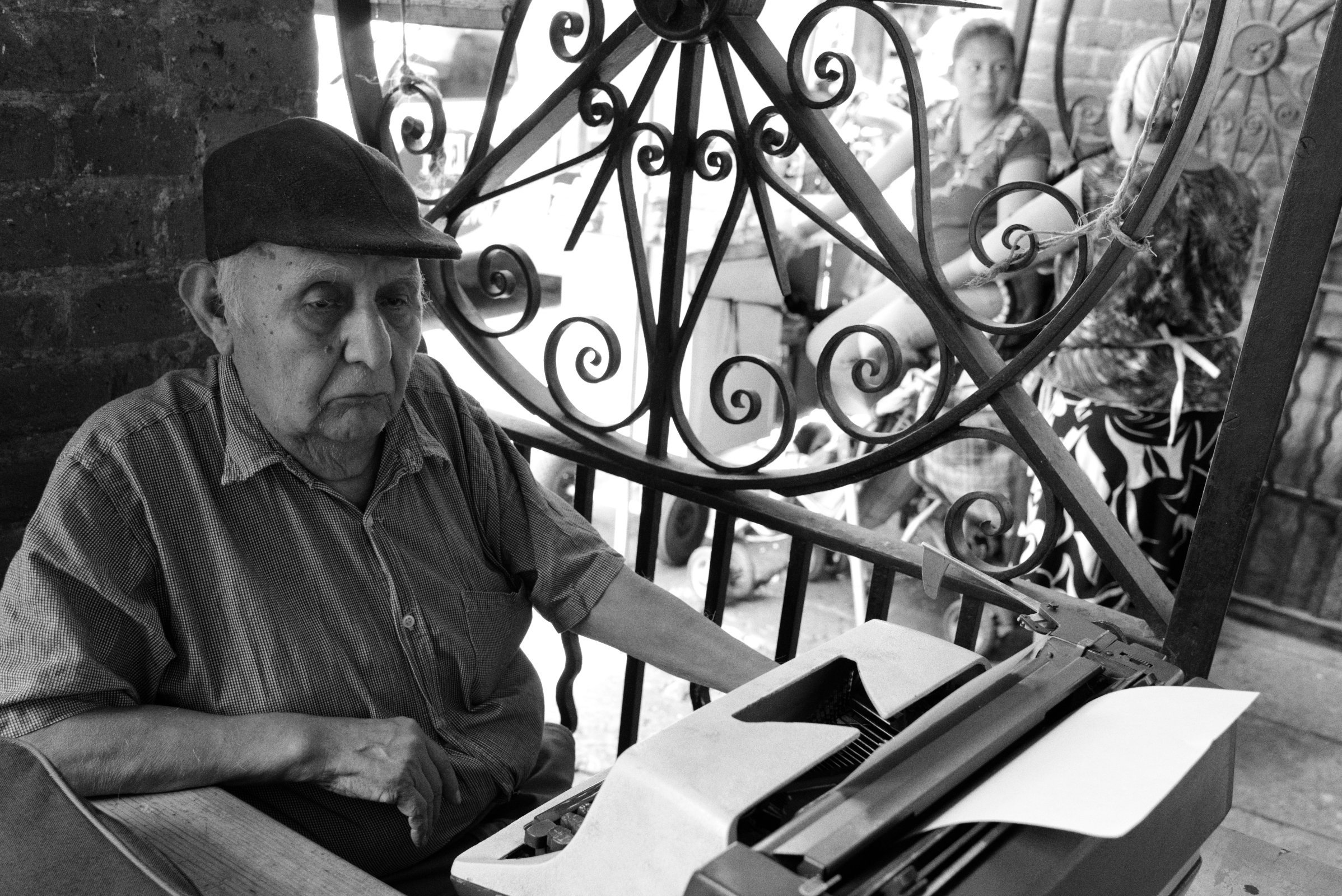