“When you are a China… your whole family becomes China. My father or my boyfriend will go pick up my adorned basket. My mother will iron my blouse. My sister – it is her first year as a China – braids my hair… My mother sometimes can’t believe how much time I give, that we all must give. She does joke sometimes she is going to start charging me to iron.”

Miriam has been a China Oaxaqueña for five years. She joined because her brother was joining as a farolero dancer. He is Deaf and asked her to also audition to help navigate communication. When I ask how long she thinks she will stay, she promises me, “Oh, you are always a China… Some of those viejas can still dance. Maybe not in high heels but they can still dance. Someday, I hope I will be married – and the Chinas will dance at my wedding, of course! – and I will have a family and maybe I will not have the time.” She crinkles her face and shakes her head at the thought. “To be China is as much a part of me as to be a teacher or a student or a daughter.”

With weekly rehearsals and public commitments throughout the month, the dedication of the Chinas is startling. It takes time to iron and prepare baskets with fresh flowers, to weave black yarn into long braids for even longer braids, to layer ribbons, medallions, and necklaces, filigree and heirlooms. A parade at 4pm means a mad dash for Miriam from work. A town celebration means that she may be up until 4am. And as a member of the not-for-profit delegation Chinas Oaxaqueñas Genoveva Medina, the costs often fall to her own pocketbook. “If we are asked to a town to celebrate their saint, we will come in our traje de gala with our baskets adorned. We know we may not be reimbursed for these costs but we would never not show up.” 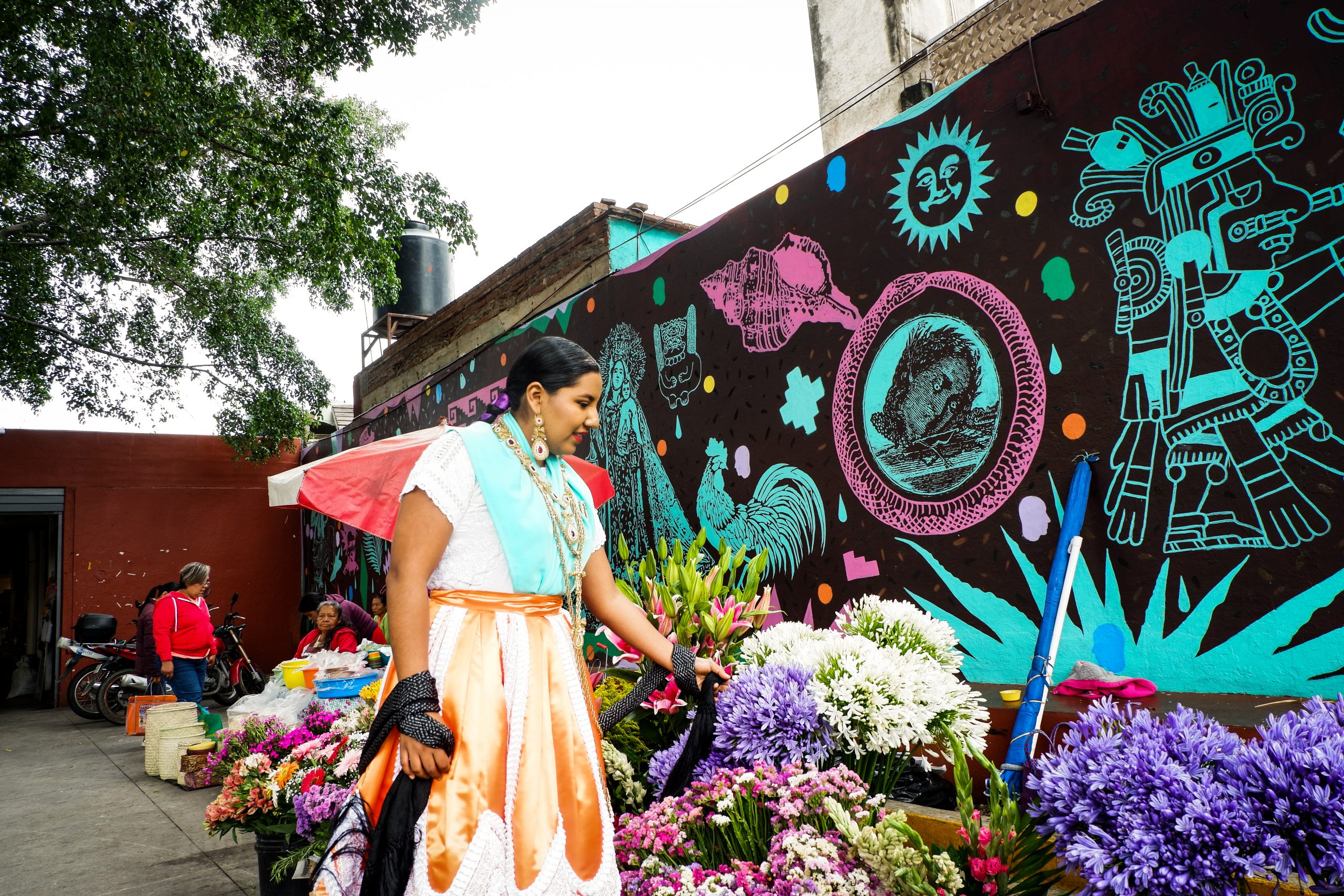 As Oaxaca becomes more popular as a tourist destination, the Chinas are a familiar smiling face, a familiar twirling skirt, in travel magazines and on Instagram. For Señora Isabel del Carmen, the Chinas are Oaxaca and they are her family history. Her mother, Genoveva Medina, her sister, Sylvia, and now her niece, Zaira, have led the Chinas from a small group of four women walking in the Lunes del Cerro procession in 1957 to the celebrated 200-strong delegation of dancers they are known to be today. Isabel del Carmen echoes Miriam’s commitment. “The Chinas Oaxaqueñas was formed to be the hostesses of the celebration of the saints. If we don’t come… what terrible faith that would be!”

Isabel del Carmen leaves her chair on the veranda to admire a beautiful new skirt on one of the Chinas. She tries to describe the color of the blue skirt she once wore, she tells me that her orange skirt “was so beautiful, I wore it for two years, but with different lace, of course.”

There is always an inspection to ensure uniformity and adherence to the rules. “Oh, we always had the rules. Because we are the proud Chinas Oaxaqueñas…” Isabel del Carmen remembers the inspections well and continues to watch over them during the intense rehearsals leading up to Guelaguetza. “It never felt like a burden… except, of course, when we were hungry or running late or tired.” She is laughing as she makes a mock stern face, remembering a scolding or a rushed adjustment.

“Oh, you are always a China,” says Miriam. 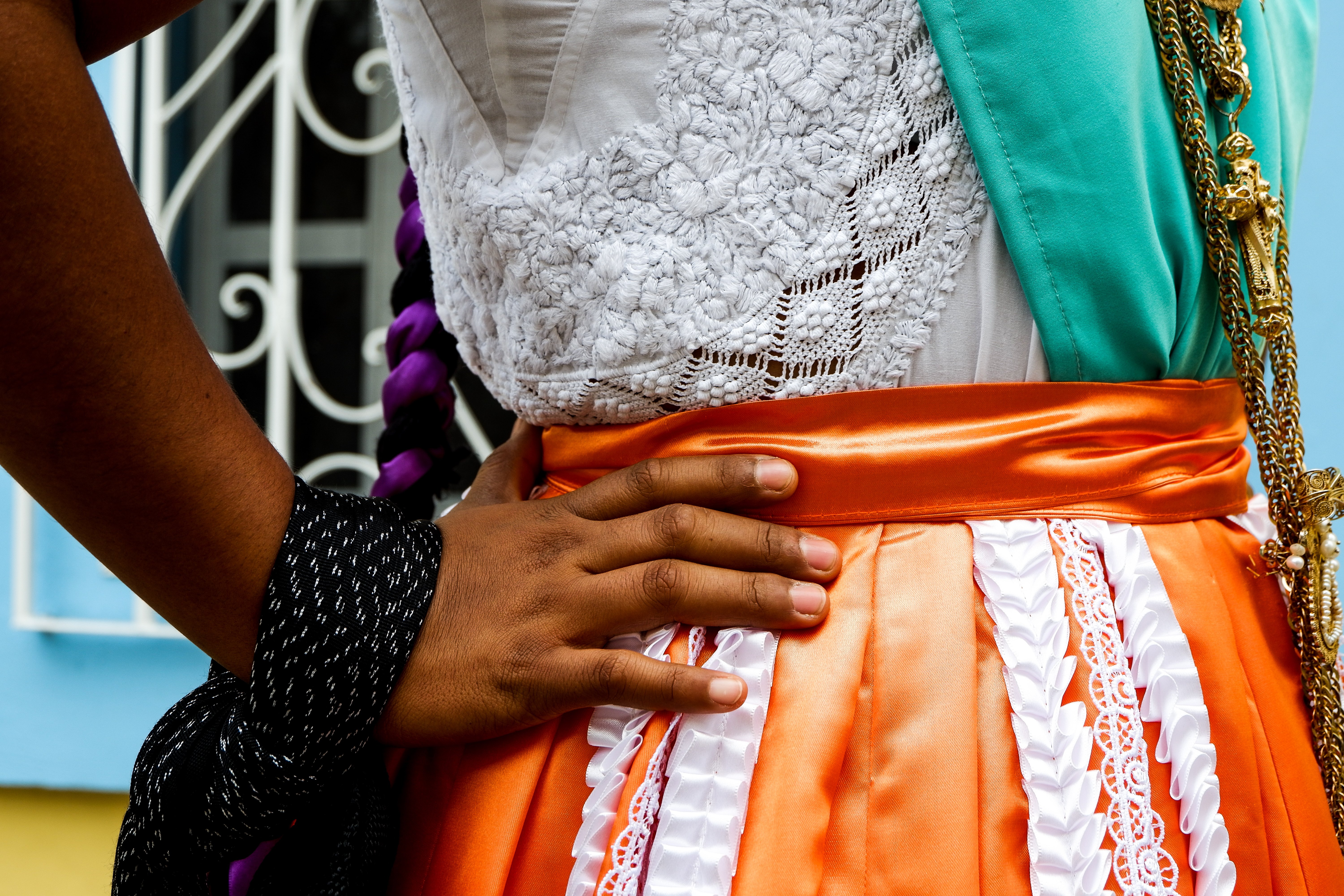 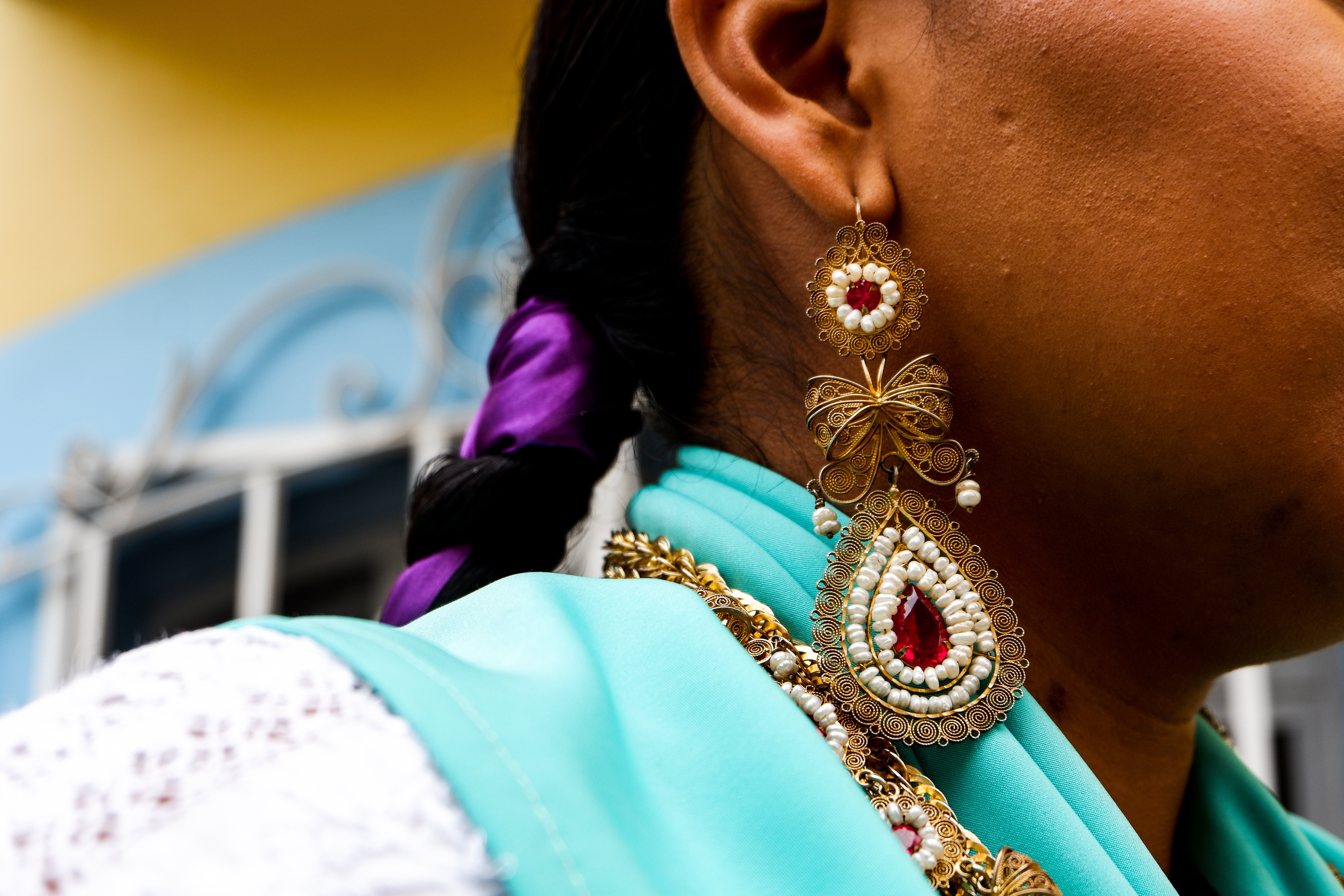 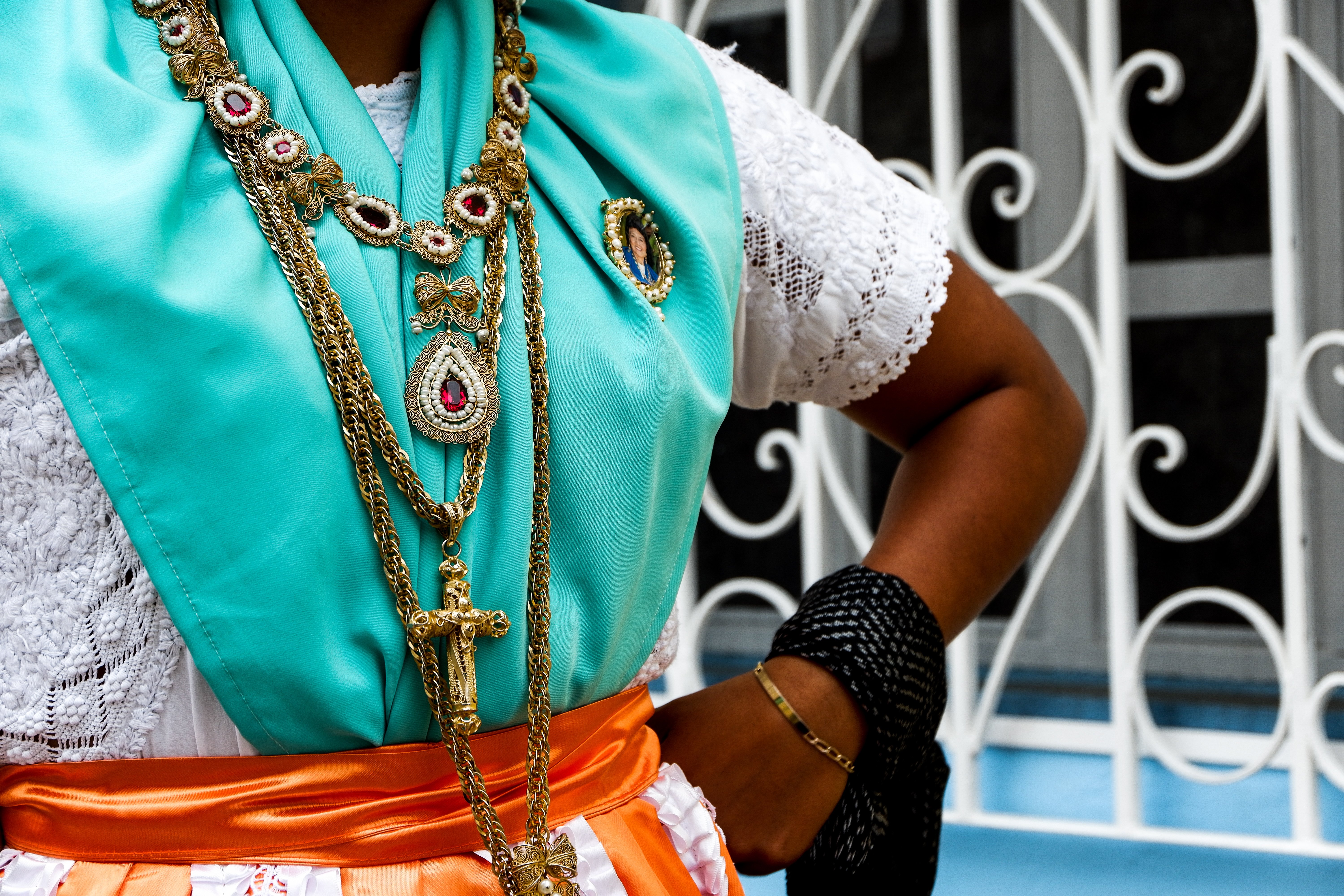 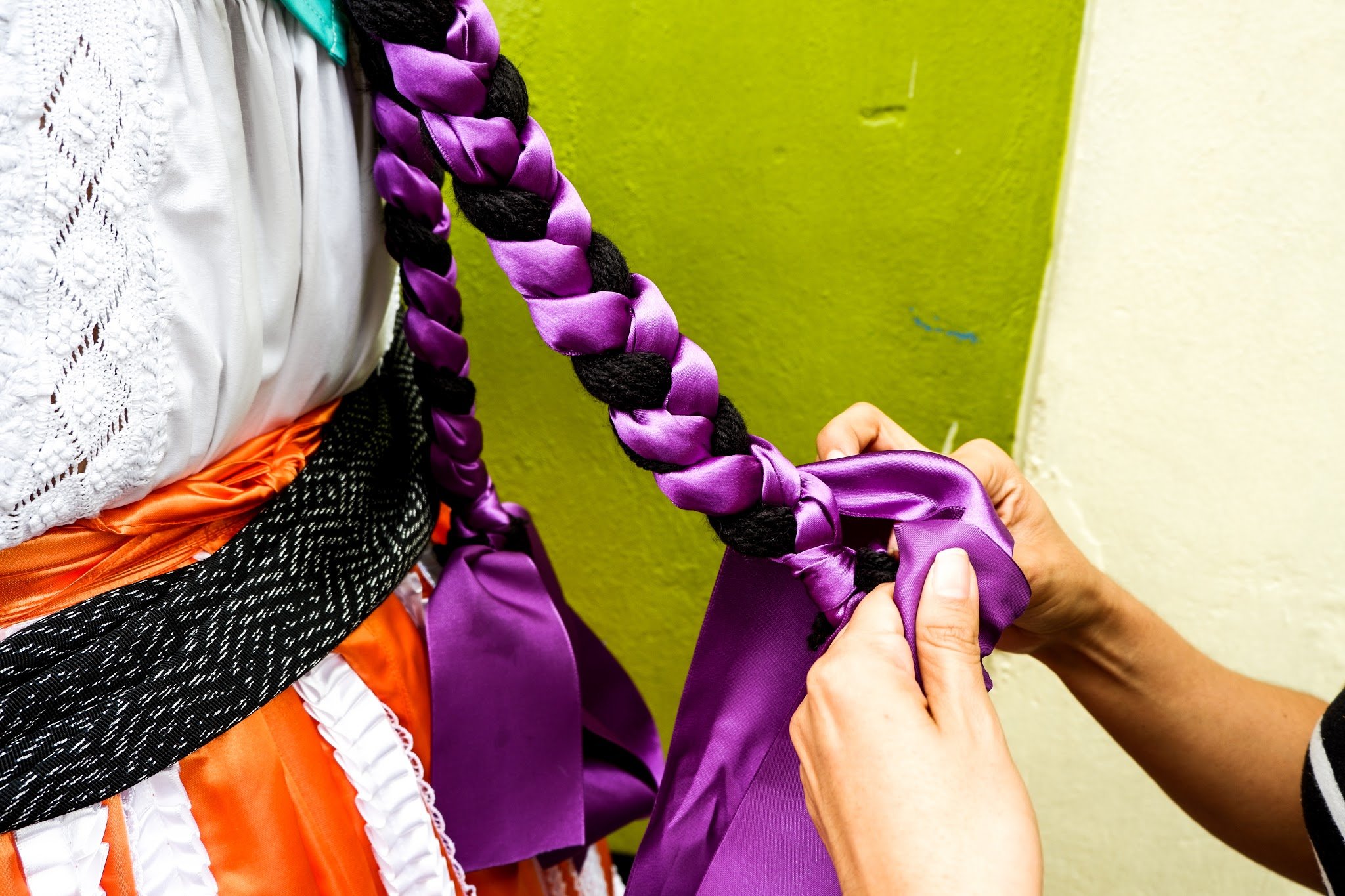 In July, the Chinas are often dancing in a convite or calenda or desfile every day. “When August comes,” Miriam jokes, “we don’t know what to wear after a month of satin skirts!” Despite the joyful nonstop pageantry of July’s Guelaguetza, it is December 18, Día de la Virgen de la Soledad that brings the entire delegation together to make the pilgrimage to the Basílica. The patron saint of Oaxaca is also the patron saint of the Chinas; she is embroidered on their clothes and holds honor in the shrine at their rehearsal space.

Miriam was a university student when she first joined the Chinas. She is now a teacher for differently-abled children while she also earns her master’s degree. She sometimes has to ask her professor to leave class early or miss a performance because of a final exam. “You find the time. You keep extra snacks in your basket.”

A lot has changed in the 62 years that the Chinas Oaxaqueñas has served as the anfitrionas of the Guelaguetza celebration. Isabel del Carmen sighs. “I wish I had more photos from then. I would put them all on my Facebook. I would go viral.” This brings up an important question about which I speak at length with Miriam. How do we find balance? Not just in work and dance, but in tourism and family, in Oaxaca and the world who has come to know and love Oaxaca? 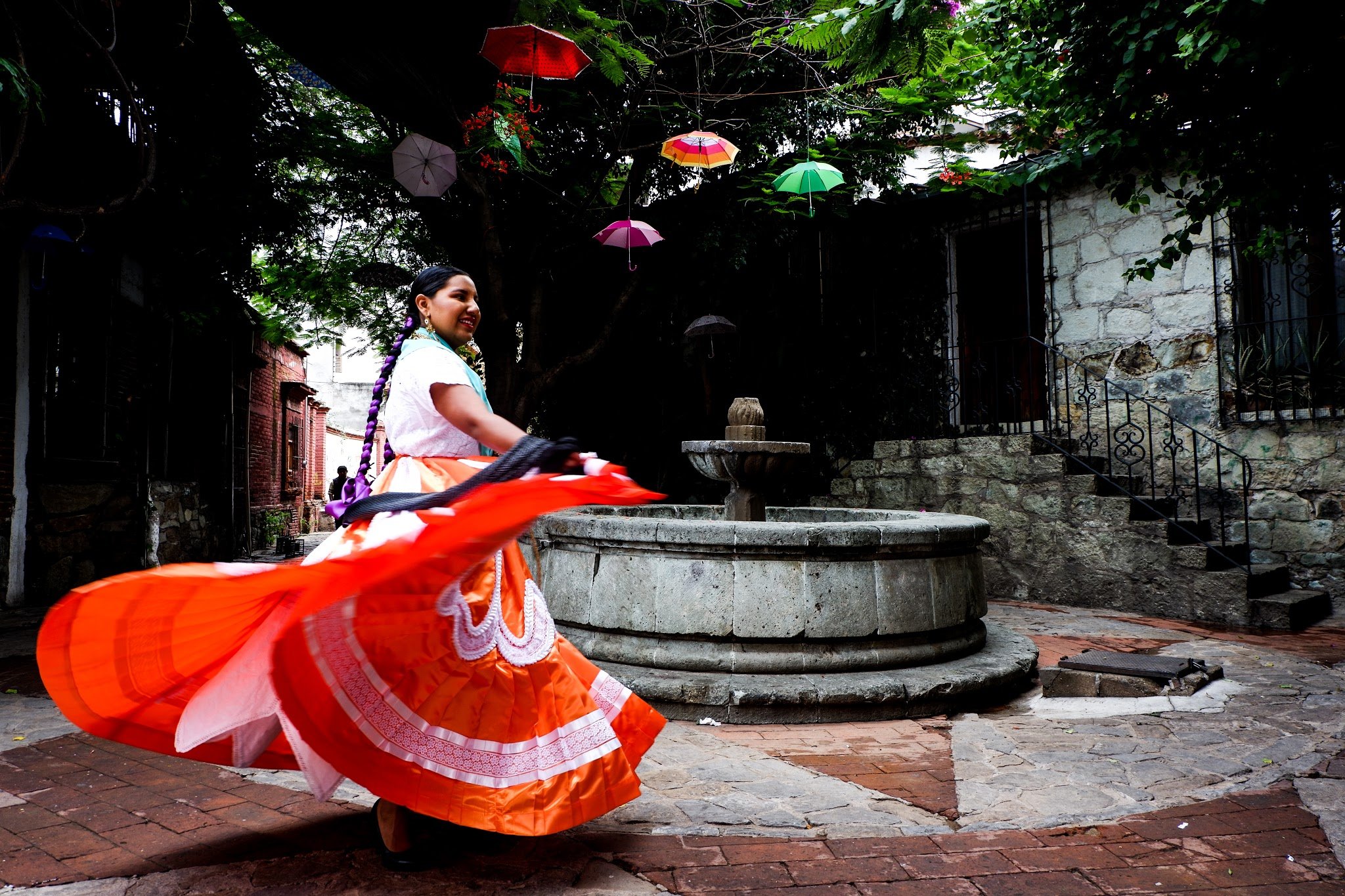 Miriam tells me with great pride that she saved money last year to buy a ticket for her mother to come to the Auditorio Guelaguetza. “Everyone thinks I have tickets to give away. If I want a ticket I will have to buy it. I certainly don’t have time to wait in line for the free seats!” To dance on the Guelaguetza stage is an honour Miriam has had four years in a row but she also acknowledges that “it is a show for people who are rich with money or with time.” The smaller Guelaguetza celebrations in neighbouring villages feel more authentic, more connected, and more accessible. “I invite my friends and family to come to the pueblos. It is just as much joy to dance there; I hope it is as much joy to be in the crowd.”

A lot has changed in the past 62 years. But Isabel del Carmen shakes her head when I ask about the risk of Oaxaca becoming too popular. “Who doesn’t want to be Oaxacan? Who doesn’t want to be a China Oaxaqueña? Sorry, not everyone can do that but they can come and watch us. Who am I to stop them?”