Thursday, October 28
You are at:Home»Art + Culture»Art»In conversation with Mercedes López

A native of Oaxaca, it is here that Mercedes López found drawing to be a vehicle for expressing her reflections on life and death from an early age. Today, she is a well-known artist with an impressive and constantly evolving career and she has been a driving force for creating more space for women in Oaxaca’s visual arts community.. Apart from her work as an artist, producing and exhibiting her own graphic art, sculptures, and paintings, she also dedicates her time to the dissemination of her knowledge through workshops and courses, within and outside of Oaxaca.

It is in the Taller Producción Zanate workshop that Mercedes shares with QPO her motivations and challenges. This spacious and bright space in Jalatlaco attracts dozens of local and foreign artists. It’s also the place she creates and exhibits some of her recent work: cold needle etchings and aquatints, two of her preferred techniques. Mercedes shows us this work, along with her watercolours and drawings. She notes how lucky she is to have had the support of many people, especially of great teachers such as Akiko Miyashita, Shinzaburo Takeda, and Daniel Flores, the latter her former teacher at Taller Rufino Tamayo and the current director of Taller Producción Zanate.

“My formative years were spent in Casa de la Cultura and in Taller Rufino Tamayo, which are obvious options here in Oaxaca if you want to approach arts, and they do a great job because any child or adolescent can approach these spaces in Oaxaca and find their doors open.” Even though her first career was in communications, her inclination for visual arts was there from childhood. She can perfectly recall her father and grandfather drawing, mostly political satire. From these memories, she is sure that she inherited a taste for the communicative potential of visual arts.

For a period, stark images found in newspapers attracted the artist’s interest and the reproduction of these images by means of engraving and drawing became a cathartic endeavour for her. “Above all, I focused on the issue of violence unleashed in Mexico from the 2000s. My work was to appropriate these images related to crime and transform them, thus expressing my preoccupations in those days. But each day it became more and more difficult, increasingly more painful to depict this violence you see every day”.

Mercedes entered the Fine Arts School at Universidad Autónoma “Benito Juárez” de Oaxaca (UABJO) where she studied visual arts and specialised in engraving. In 2012, she completed a residency in graphic production at Pratt Fine Arts Center in Seattle. Through drawing, she was able to focus on her preoccupations and on her artistic expression: “The foundation of my work is drawing. The underlying structure of all my work is drawing; it is even there in my watercolour work.” 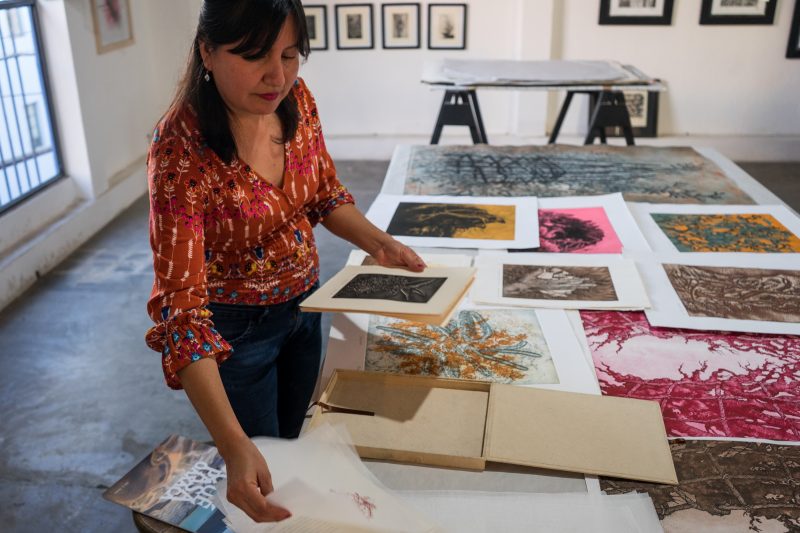 In this way, Mercedes went from depicting extreme violence in her work to reflect on the aesthetics of the constant consumption of funerals. Her background living in cities constantly besieged by extreme violence like Monterrey, Hidalgo or Cuernavaca has also led her to question the life/death duality: “What is the meaning of a dead body? Could it be reborn? […] In my work, the tied-up corpse, the abandoned body (a common sight in Mexico) slowly becomes the “funeral fodder”, which in turn becomes a seed. I intend to express this metamorphosis, not only in terms of image but also in terms of the concepts I work with. For this reason, the political slogan ‘They wanted to bury us, but they didn’t know we were seeds’ became so important to me.”

This was also the context in which her strong impulse for representing life was born, leading her to study for her master’s degree in artistic production at the Arts Faculty of the Universidad Autónoma de Morelos (UAEM). There she undertook a research residency at the Centro de Investigaciones Biológicas in order to analyse the relationship between art and nature, a central topic in her visual work. “I have always considered art as an investigative process,” she reveals. She continues this process to this day as she is currently specialising in art history at the Instituto de Investigaciones Estéticas which is part of Universidad Nacional Autónoma de México (UNAM) here on the Oaxaca campus. 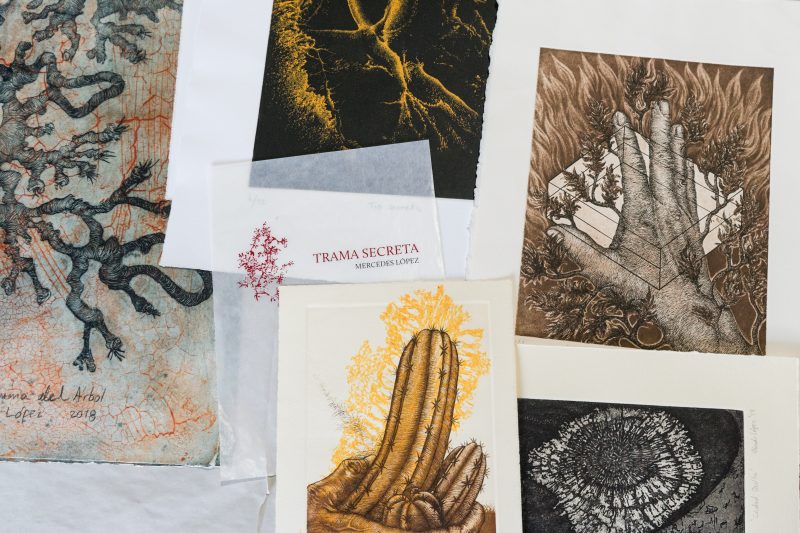 Mercedes acknowledges that the visual arts circuit in Oaxaca has been historically male-dominated and that it’s thanks to the effort of women who have (literally and metaphorically) broken rock that art spaces have become more inclusive. “Fortunately, there’s more openness, and there are more women involved. To tell you the truth, the beginning was difficult for me, since engraving was considered a men’s craft. They used to argue that traditional techniques like wood and metal were hard work because you had to be able to operate mechanical tools. There was a stigma for women doing engraving. But when you begin working with these machines you realise it’s not that hard. This is why I think self-education among women is a powerful action if we are meant to bridge the gaps.”

Throughout our conversation, Mercedes has maintained her characteristic enthusiasm and she is excited to announce her forthcoming activities: “Next February, I’m doing a collective exhibition celebrating the first anniversary of Hoja Santa workshop which is led only by women. In March, it’s the second edition of Mújeres en la Gráfica Oaxaqueña, the first edition of which was organised last year in the context of International Women’s Day. It will feature most of the women currently working with engraving here in Oaxaca. This time, the gallery of the fine arts school will host the event. Also, next April, I’ll be part of a collective exhibition at the Museo de los Pintores Oaxaqueños (MUPO) to celebrate the 17th anniversary of Mujeres magazine.” The list of her expositions seems as endless as her passion to create and to draw art closer to those who share her sensitivity, commitment, and curiosity. 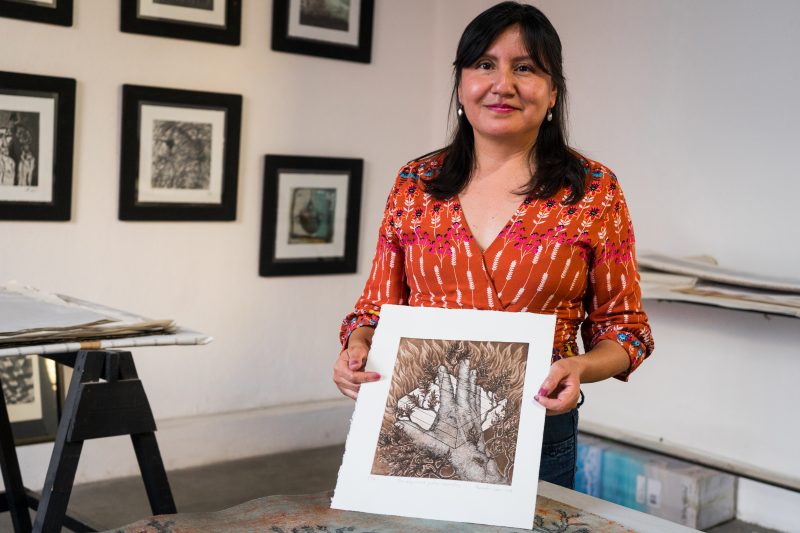