Winter is here!  You can feel it in the cold winds, in those crazy cravings for hot punch (with or without a *magic touch*); in the delicious December meals and in the marathon-like parade of parties, posadas and calendas.  This season is celebrated almost everywhere around the world but here we have 7 reason why Winter in Oaxaca is unique.

Celebrated in Oaxaca and all of Mexico, posadas commemorate Joseph and Mary’s pilgrimage before the birth of Jesus. A group of singing pilgrims (either dressed as Joseph and Mary if they are purists, or carrying a nativity scene and candles) ask for shelter in different houses.  After being rejected several times they finally manage to find a generous soul who opens their door to them.  Happiness and relief go along with the welcome. Warm punch, tamales, molletes and, of course, a piñata are the elements always present in these celebrations. Posadas are celebrated during the 9 days that precede Christmas Eve, so you still have time to be part of one.  Despite the Catholic roots of posadas, in México they have a special touch – cumbias and a party-like feeling among young and old turn them into a must-go Christmas event.

This unique and traditional event is 100% Oaxacan and is celebrated every year on the 23rd of December.  It’s a contest where talented people of all ages carve enormous radishes, planted and harvested especially for this day, into intricate figures. The themes represented cover many traditions: fantastic animals and figures with traditional attire as well scenes replicating Oaxacan holidays and everyday life and Christmas themes such as nativity scenes and the Three Kings. The contest is held in the Zocalo and officially opens at 4pm.  You’d better get there early, otherwise you might have to wait in the queue for up to three hours.  Oaxacan talent is displayed at its fullest on Radish Night – it’s an explosion of creativity and skill.

3.  Day of the Holy Innocents

December 28th is a crazy day. Newspapers and social media are brimming with surprising and even controversial news, but there is one little detail- they are all false. So if you run into any unexpected news that day, don’t panic, it is just dutiful people celebrating the “Day of the Holy Innocents”.   Stay alert as pranks and jokes ranging from hardcore to light ones can pop up anywhere. In case you happen to be the target don’t be surprised if you’re told the iconic and wise saying: “innocent little dove, you were fooled even though you knew that you’re not to trust anyone on this day”.

December 31st is a very symbolic day as it marks the end of one cycle and the beginning of a new one. In order to celebrate properly you need to perform a “fire cleanse”.  How? Basically by burning the old year and all that it represents.  Looking up is important in Oaxaca, especially on these days.  You’ll notice a scarecrow figure chilling on the balconies and rooftops – it’s nothing more and nothing less than an old man doll made of rags a.k.a. the Old Year.  On New Year’s Eve this doll is burned, and with him all the bad vibes are gone and the path is ready to welcome a brand new year full of exciting expectations.

On January 5th people celebrate the three Eastern Kings’ visit to baby Jesus.  As everyone knows, the Kings gave the newborn Jesus three trunks of incense, gold and myrrh.  Although nowadays kids find those gifts weird, they do expect to receive something and send the three kings balloons with letters attached to them. On January 6th the kids receive their gifts and enjoy a slice of “Rosca de Reyes”- a cake with candied fruit on top and filled with many surprises. These surprises are plastic figures of baby Jesus hidden deep inside the cake.  Slicing the Rosca is a very exciting ritual where everyone is looking forward to finding out who got the slice with the baby Jesus figure in it. Why?  Well, to have an excuse for another party of course!   A piece of advice: don’t try to swallow the figure, that won’t save you… 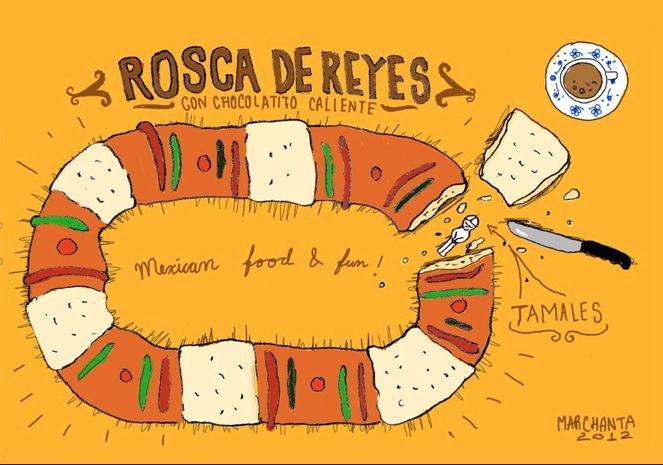 Candlemas is a holiday commemorating the presentation of Jesus at the temple. Despite the religious connotations, Oaxaca’s Candlemas celebration goes into another dimension. The baby Jesus figure hidden in the Rosca makes sense every February 2nd.  Each person who found a figure inside their slice is in charge of hosting a night were tamales will be given away to all their friends. That is why getting a figure or not is such a stressful event for the potential hosts and a very funny moment for the future guests.  Candlemas is the cherry on the cake for Christmas events in the whole state, and people say farewell to the winter season with more warm punch, more molletes and a lot of cumbia.

This season is also known as the Guadalupe-Reyes Marathon among young Mexican people. This means that celebrations start on December 12, Virgin of Guadalupe Day, and end on January 6, on the Three Kings Day. However, in Oaxaca we take things to a whole new level, resulting in our own interpretation of this marathon – the Marathon Juquila-Candelaria.  This marathon runs from the Virgin of Juquila Day, December 8, to Candlemas, February 2 (new research suggests there is another version: Day of Dead-Candelaria, Oct 31-Feb 2!). Regardless of the occasion, during this nearly two-month period it is completely acceptable to break piñatas just because.  A lot of people think this is only an excuse for heavy drinking, but that’s not entirely true – joy and celebrations are an almost sacred part of Oaxacan culture, it’s how people acknowledge they are healthy and, therefore, have many reasons to smile and keep on moving. If you want to end the year with the right attitude, come to Oaxaca!

This article was originally published in December 2016.