Thursday, June 24
You are at:Home»Uncategorized»Off the Beaten Path With Traditions Mexico

Traditions Mexico is not your average tour company. Established in 1997, they offer cultural journeys for travelers who want a more immersive and hands-on experience than what may be offered by other tour companies. Their well-experienced guides chaperone travellers through remote villages and sites, journeying deep into the world of Oaxacan art, cuisine, and the lives of its creators.

Our group participated in one of Tradition Mexico’s day trips “Tortilla! Food of the Soul” diving straight to the heart of the tortilla where we witnessed the journey from its humble origins as maíz, to its final presentation in a delicious, savoury meal prepared by local tortilla makers.

The first stop on our adventure was the archeological site of Yagul, perched atop a hill in the Valley of Tlalocula, approximately 1.5 km away from Oaxaca City. The ruins, which served as a city-state for the Zapotec people, were constructed between 500-700 AD and are known to be close to the caves where the first ears of corn were discovered.

One of the first things our guide Antonio pointed out to us was the shards of pottery littering the grounds that were most likely from pots used for cooking, as evidenced by barely detectable burned surfaces on the clay.

While the ruins are not large, as many as eight elite Zapotecan families were said to inhabit the labyrinth-like residential area, otherwise known as “El Palacio de los Seis Patios” (The Palace of Six Patios) at a time.

Not far away from El Palacio lay the ball court, which is the biggest in the Oaxacan Valley and the second largest in Mesoamerica after the court at Chichen Itza. Not only does the altitude of the ruins offer stunning views of the surrounding valley, it also provided the Zapotec with a lookout point for spotting potential invaders. 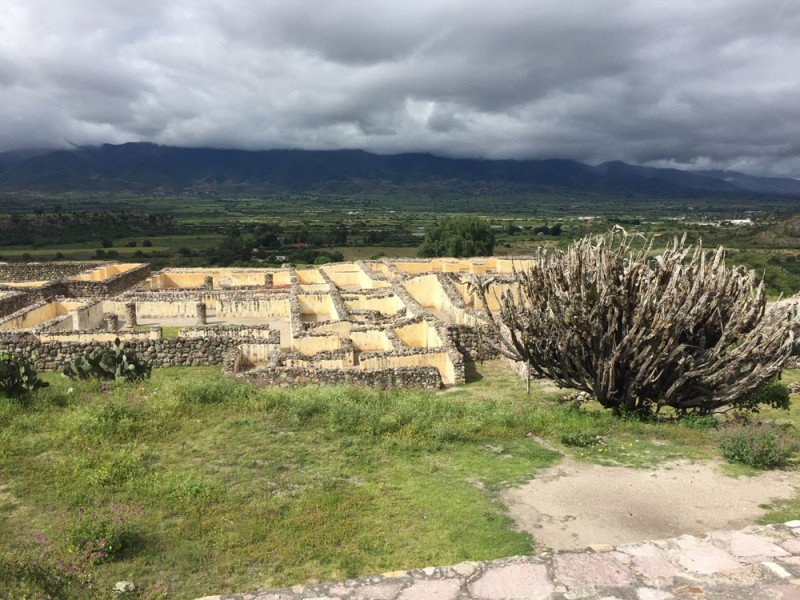 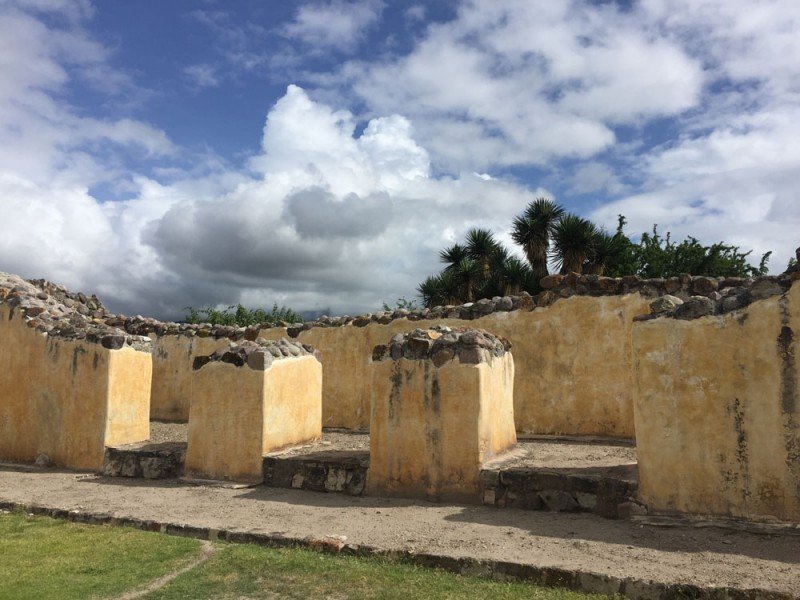 Perhaps helped by the fact that we were the only visitors on site at the time, the feeling at Yagul was peaceful and serene. It wasn’t hard to imagine families going about their daily lives, buying and trading goods, and preparing meals to be shared amongst other villagers.

Next, we made our way to San Marcos Tlapazola to meet a collective of women known as Las Mujeres de Barro Rojo, or the Women who Work with Red Clay. As with many of the outlying towns of Oaxaca, San Marcos Tlapazola’s economy is rooted in the production of a craft that is unique to the village, which in this case is items made from clay and glazed a distinctive red color. 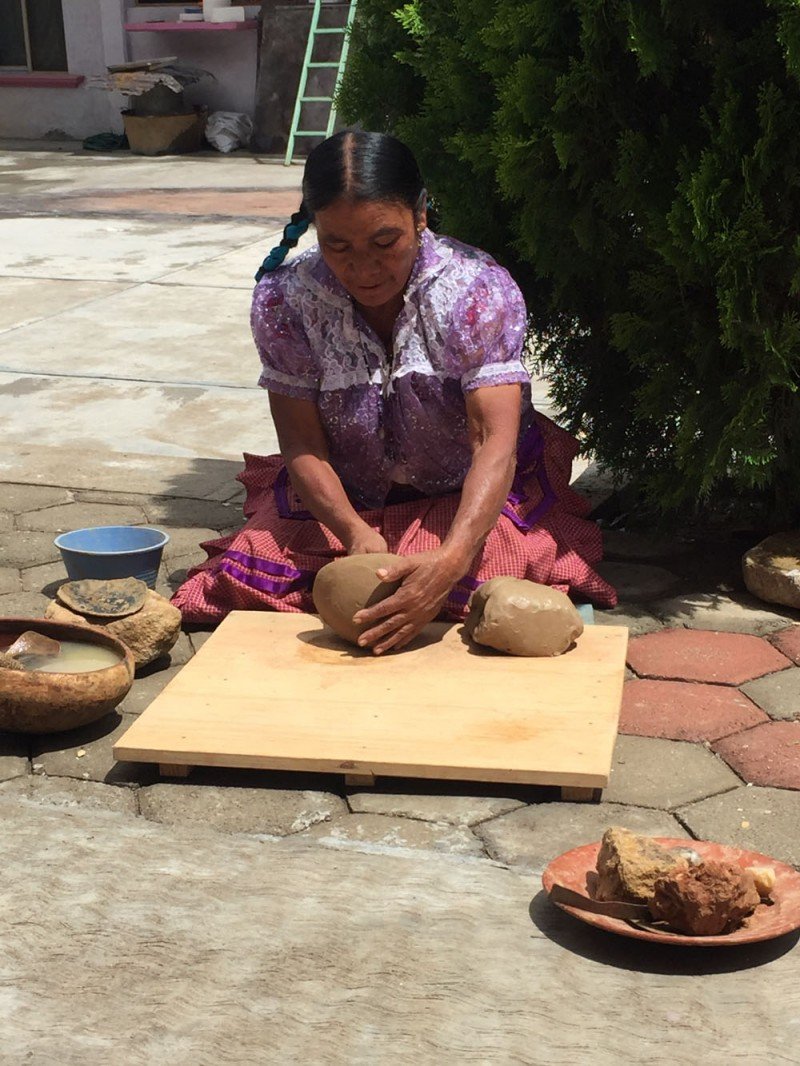 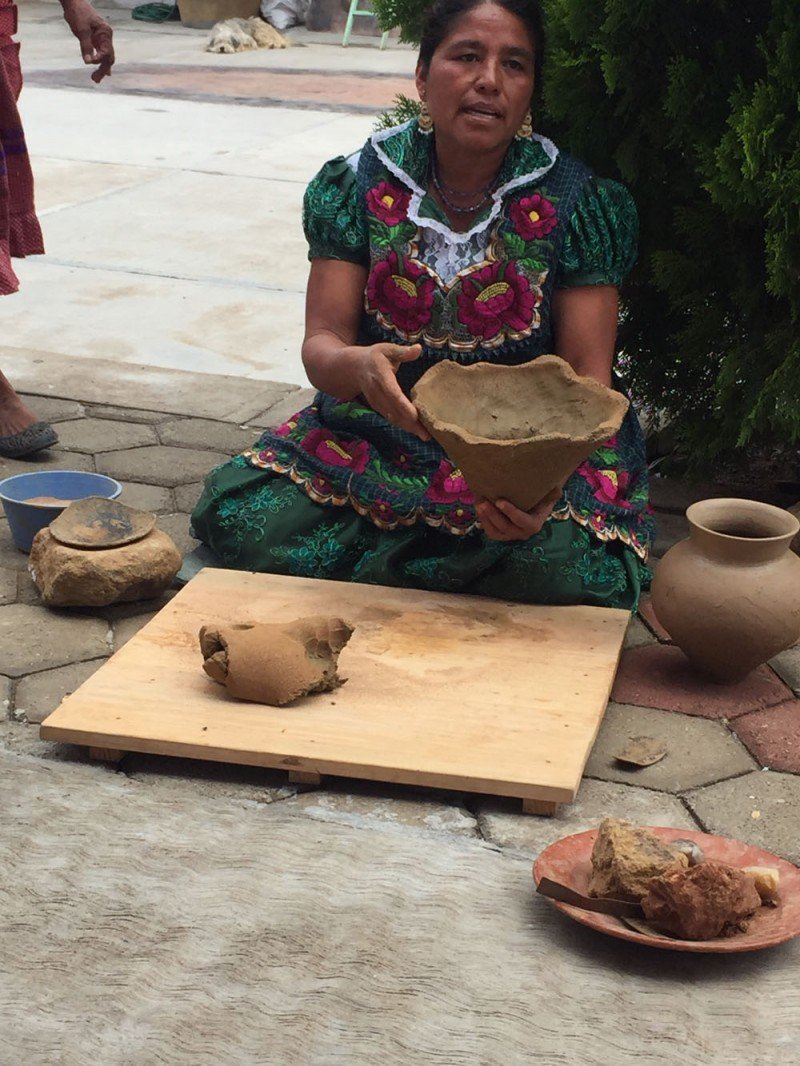 Upon our arrival we were warmly greeted by sisters Dorotea and Macrina who specialize in making pottery from the aforementioned clay that is found locally.

While the women make a variety of goods including gourds for water and animal figures, we had arrived to learn about the comal: the traditional clay cookware upon which tortillas are prepared over an open fire.

The clay used for the pottery is mined from a nearby hill by the women, and is collected in rebozos (shawls), which the women then carry on their backs into town.

We were surprised to find out that most of the tools used to make the pottery are somewhat commonly found, and perhaps even a bit unconventional. For example, a small piece of basketball is used at the base of the potter’s wheel which allows the women to easily rotate the clay while shaping it. A de-kerneled and dried corn husk is rolled on the surface of the clay to elongate and shape it, and a piece of gourd is used to shape the inside of the pots and form a “belly”.

We sat back and watched as Macrina transformed what was once a large heap of clay into a beautifully finished comal, ready for the fire. The entire process took about ten minutes from start to finish.

The women have ventured long and far to sell their wares, and have even traveled to New York City where Dorotea says the sisters had a successful run. While the sisters’ pottery is internationally in demand, much of it can be found in Oaxaca proper, and of course is available for purchase at the sisters’ locale in San Marcos Tlapazola.

After leaving Las Mujeres de Barro Rojo we began snaking our way through the brick streets of Tlalocula and eventually eventually arriving in a small locale in San Juan Guelaivia.

Here, both yellow and blue corn, or maíz negro, were being ground and formed into a thick masa (dough), by a woman named Celia. As we stood and watched the corn being processed, Celia explained to us that the kernels were previously soaked in limewater, which softens them and makes them easier to grind.

The masa from this batch was to be turned into tortillas that Celia sells to neighborhood regulars and at the local market. On an average day she makes up to 100 tortillas that are either blandas, the softer variety of tortilla, or tlayudas, which are left to cook on the comal for a little bit longer to give them a slight crunch.

Afterwards, we headed to Celia’s house to begin the process of making making our very own tortillas. She began by demonstrating with the press how to flatten the ball of masa to form the perfect tortilla.

Following her example, we began to press our tortillas and then laid them on the comal to begin cooking. After a minute or so Celia whisked the tortillas off the comal and set them aside, as we continued to press tortillas.

Eventually we had made enough, and we enjoyed our novice tortillas with homemade salsa and a few slices of fresh queso.   ‘ 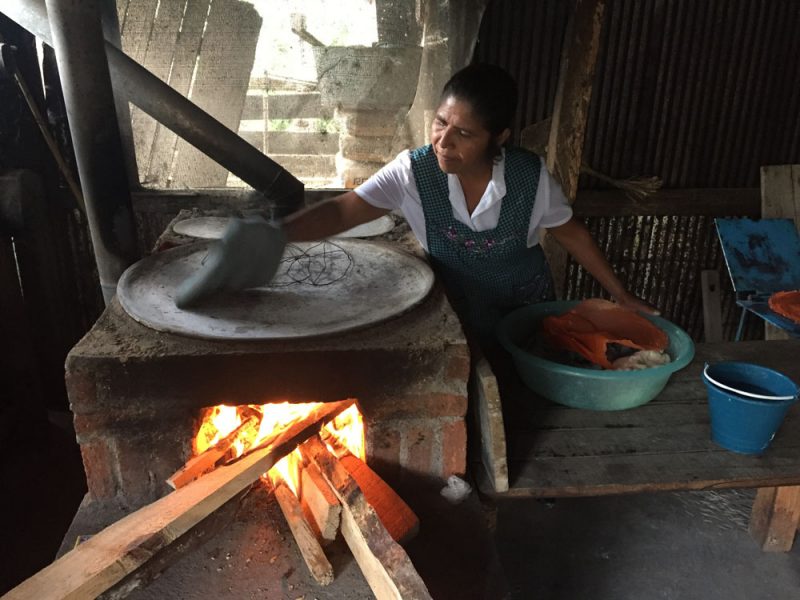 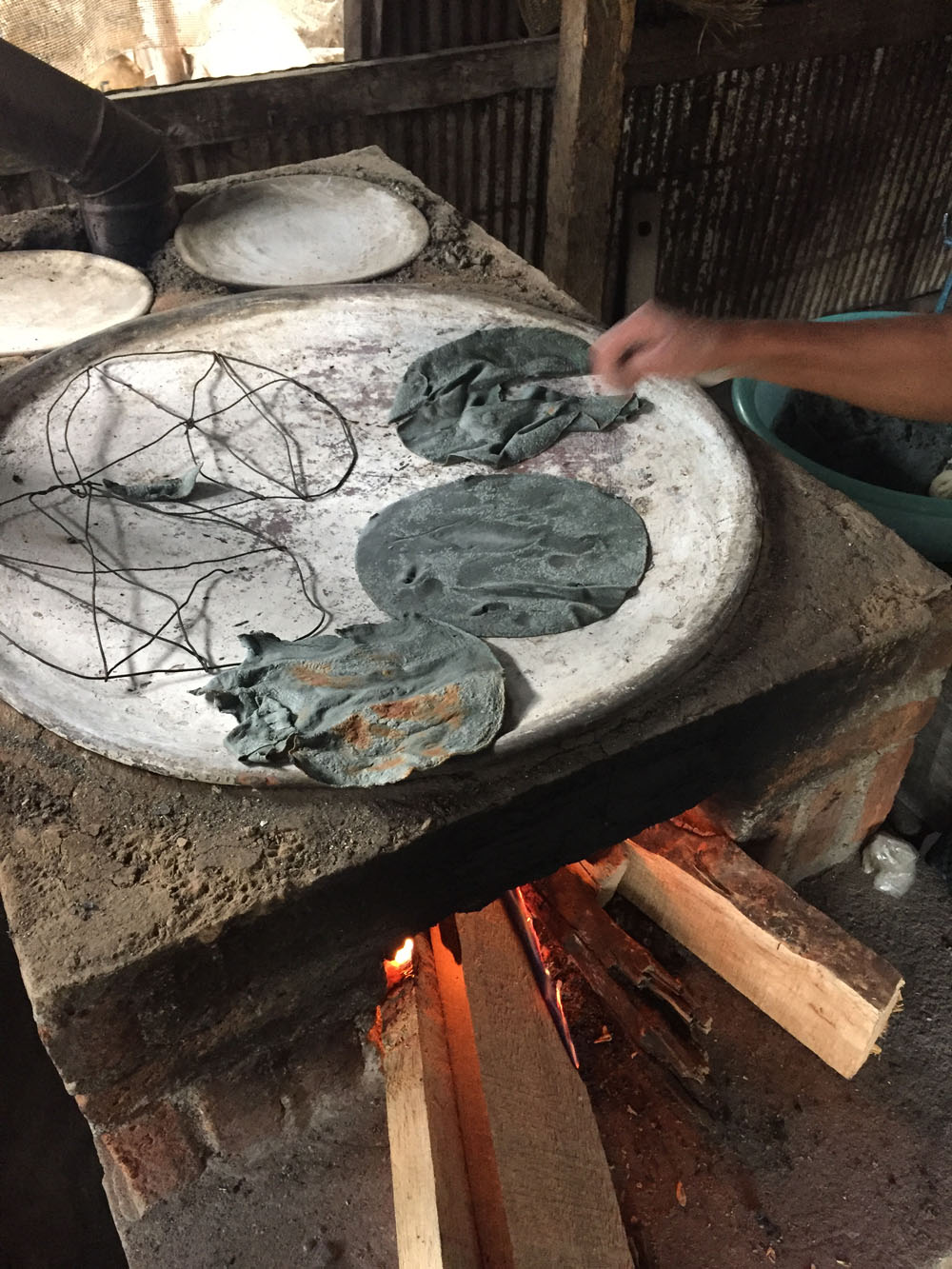 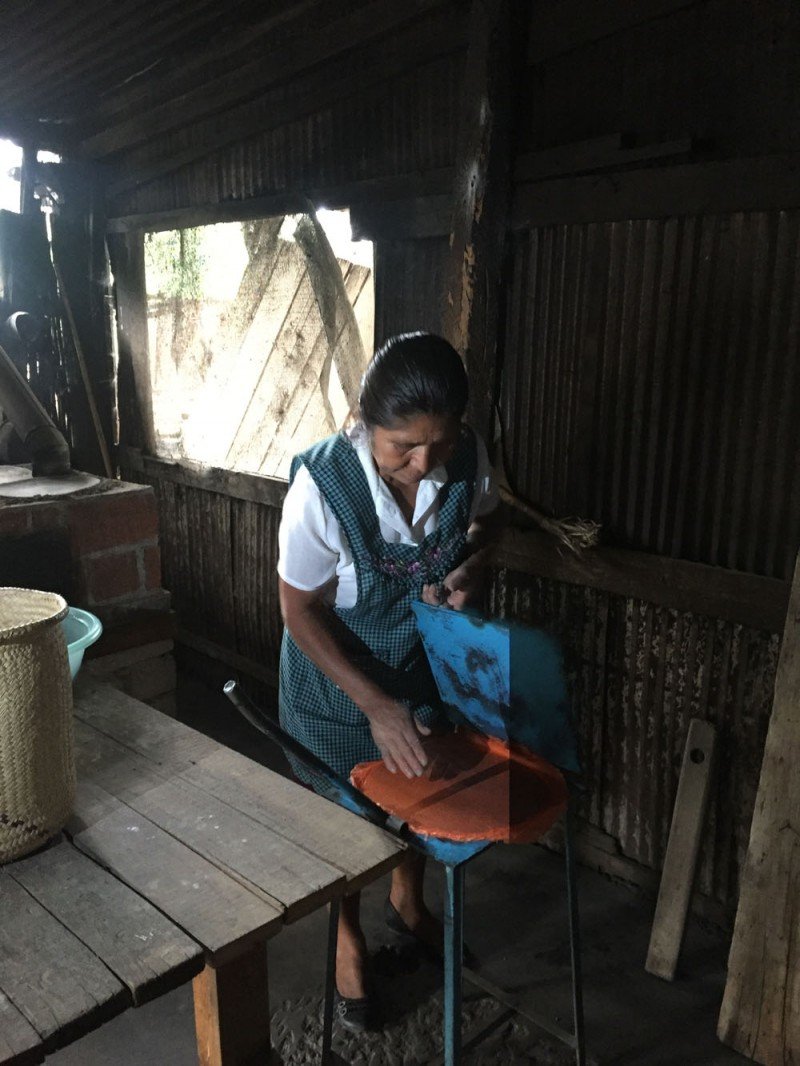 Although delicious, the tortillas only served to whet our appetites since we hadn’t eaten since breakfast. To round out the meal, we headed over to the home of Maria Trinidad in Teotitlán del Valle, a village best known for its production of textiles. Maria’s home featured a large loom in the common area outdoors, that was surrounded by traditional rugs, clothing, and other goods the family produced.

Before eating, we gathered on the floor around a metate, which is a stone tool traditionally used to grind corn and other grains. It was clear we were going to have to work for our food, so we observed Maria closely as she ground the corn into fine powder so we’d be able to repeat the process.

After working up a sweat over the metate it was finally time to eat. Maria offered us a mezcal for a job well done and we gathered around the table to enjoy a lovely caldo de pollo that had been cooking for us long before our arrival.

It was a wonderful way to round out our journey, and it provided me with an opportunity to reflect on the generosity of all the women we had visited that day.

The trip was a success not only because it was well guided, but also because of the personal relationships the company has developed with each of the hosts. We were welcomed like family every step of the way, creating an experience that simply could not be found anywhere else.

For more information on tours from Traditions Mexico, click here. 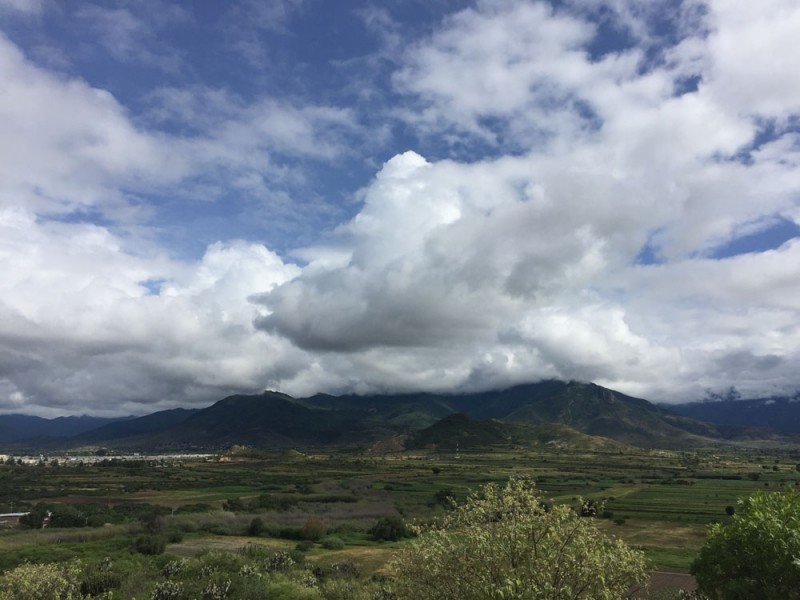