Based on the belief that the souls of the dead return to earth to visit their families each November, Día de Muertos is one of the most important festivals of the year.  The procession of souls begins on the 1st of November with ‘Día de los Angelitos‘.  On the second day, ‘Día de los Muertos‘, the souls of adults make their journey… but you don’t need a calendar to know when the dead are coming; it’s announced by the fields and the Earth. As the day approaches you’ll notice the Cempasuchil (marigold) flowers that fill the fields, you can smell them and see the bright orange flowers everywhere. As the souls draw near you’ll notice ‘el frío de muertos‘, a sudden drop in temperature and a cool wind that starts to blow; this is the wind that carries the souls home.

Families often start their preparations weeks earlier, preparing food and gathering ofrendas (offerings) for the traditional altars that are used to both guide and welcome the souls home.  Found in homes, business, schools and cemeteries the altars include photos and offerings such as food (pan de muertos, mole, fruit and chocolate), mezcal, skulls, candles and flowers – Marigolds (Cempasuchil) are most common, brilliant oranges, yellows and purples.  While all altars have a traditional base they also include favourite food, drinks and other items that were important to the deceased, making each one unique.

During this time it’s customary for families to visit the cemeteries to clean and decorate the graves and they will often spend the whole night there remembering the lives of those that have died.  While sometimes solemn, it is a celebration of life that will often include food, drinks and music.

“The Mexican … is familiar with death, jokes about it, caresses it, sleeps with it, celebrates it. True, there is as much fear in his attitude as in that of others, but at least death is not hidden away: he looks at it face to face, with impatience, disdain or irony.”
Octavio Paz, Labyrinth of Solitude

One of the best places to experience this is the town of Xoxocotlan, just outside of Oaxaca.  There are two cemeteries in Xoxo (pronounced Hoho) – a small, older one with a more solemn feel, and the large, main cemetery.  Both are worth a visit but you’ll find the biggest celebrations in the main cemetery.

To find out what is happening each day check our events pages.  Here are a few of the highlights:

* Day of the Dead costume competition for pets.  5pm outside the Jalatlaco church.

* The San Pablo Cultural Centre will be holding an exhibition of traditional altars or altares de muertos.  The inauguration is at 7pm and there’ll be a degustation of chocolate and pan de muertos (bread of the dead).  The exhibition will be open until November 2.

* Catch some free Day of the Dead theatre performances.  There will be two shows at Jardín Pañuelito, next to Santo Domingo church, at 6pm and 8pm.  The neighbourhood of Jalatlaco will also have a performance at 8pm.

*  Video mapping on the facade of the Santo Domingo church, regularly between 8 and 11pm daily until November 2.

*  This is the night to visit the cemeteries in Xoxocotlan.

* Procession of the Virgin of the Rosary, 8.30pm in the historical centre.

*  Make sure you visit the Pantheon de San Miguel to see the illumination of the tombs with over 2000 candles, and to try some of the delicious pan de muertos and hot chocolate.  The pantheon is open from 10am until midnight and the candles will be lit from 8pm onwards.  Theatrical group Lola Bravo will be offering free tours of the tombs at 5pm, 6pm, 7pm, 8pm and there will be theatre performances at 8.30pm.  These activities will run daily from 31 October  to 2 November.

*  Visit the Pantheon de San Miguel.  In addition to the daily activities listed above there will be a concert at 9.30pm.

*  If you haven’t already seen it, check out the exhibition of traditional altars at the San Pablo Cultural Centre.  They’ll also have video mapping from 7 – 9pm, every 20 minutes (also on 2 November).

* Traditional Day of the Dead parade in Jalatlaco, 8pm.

* Free concert by Panteón Rococo, 6pm in the town of Zaachila.

The city centre is filled with altars and other decorations so make sure you spend some time just wandering around exploring.  These events are just some of the official ones – there will be many other parades and activities too.  If you want to head outside of the city there are many options.  We’ve collected a lot of the regional information here.

See the poster below for the full list of events and don’t forget to check out events calendar for the complete guide to what’s happening in Oaxaca. 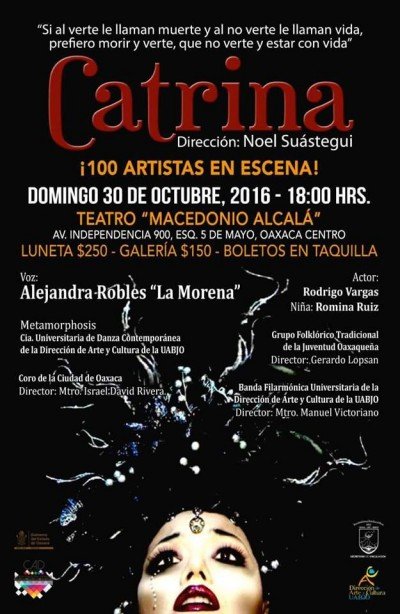 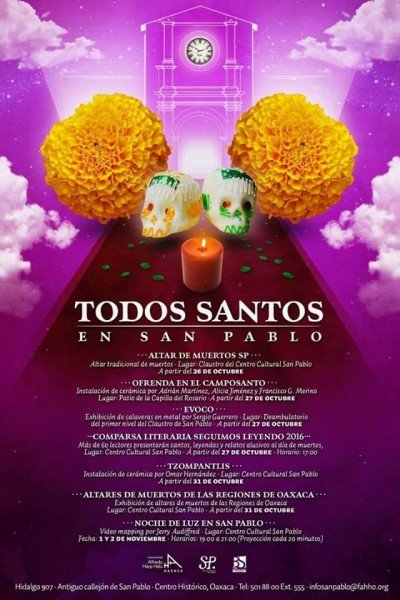 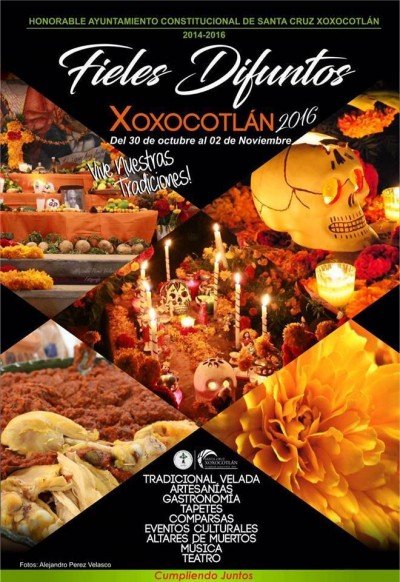 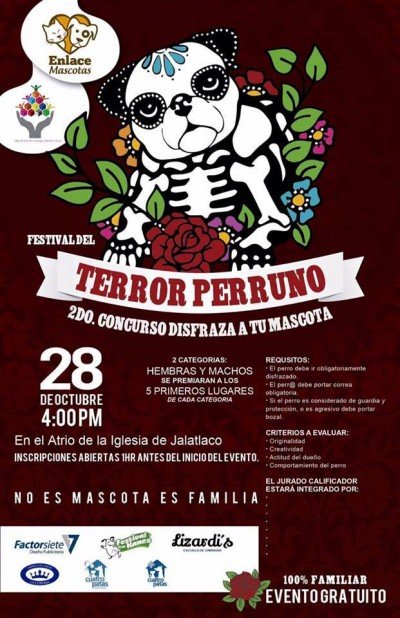